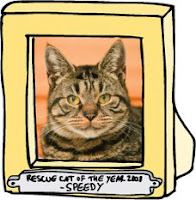 In a week when the RSPCA announced a 24% increase in cases of animal cruelty in the UK, stories such as Felix’s and that of overall winner Speedy – a remarkably intelligent-faced tabby who provides endless comfort to his severely disabled owner and is able to alert her parents when she is about to suffer an epileptic seizure – seemed all the more poignant. Presumably both of them were curled up on a duvet somewhere at home as their victories were announced, but the roaring, lionish presence of Hero Cat category presenter Brian Blessed endowed proceedings with a certain amount of feline authenticity. After an anecdote about having his kitchen invaded by a Shetland pony, Blessed also very publicly offered a saucy, purring come-on to Ultimate Survivor category presenter Prunella Scales. The Supreme Cat Show might have the 3D fluff, the extra-strong imported catnip cigars and the spangly cages, but as far as winningly unrefined feral behaviour is concerned, The Rescue Cat Of The Year Awards would seem to have the market well and truly cornered.
Posted by Unknown at 03:56

That 24% increase is truly disturbing. Why is it happening?