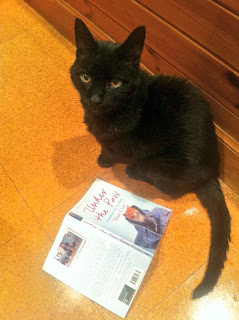 Nicknames?
The Captain, Weds, Jingle Bells, Oldcat, Please Stop Yowling At The Wall, No, You’ve Already Been Fed, Please Don’t Be Sick On That Rug.

Theme Tune?
A Well Respected Man by The Kinks

I was born in the village of Sturton le Steeple, Nottinghamshire in May 1995 and attended Sturton le Steeple C of E Primary School on several occasions, most notably through a large, open window in the middle of a rehearsal for the annual Senior Citizens’ Show. I was also an enthusiastic member of the school football team, though for some reason my teammates used to swear and shout at me when I joined them on pitch. I then signed up to the Cat Army and was posted to Lancaster, where I achieved the rank of Captain and was awarded the Slightly Chewed Small Purple Heart for my squirrel-murdering skills. Army work kept me very busy so I had to give up my other hobbies- except blood sports – until being adopted by Mads and Hilary in Scotland at the ripe old age of 16. I currently run a small garage in Penicuik on a semi-retired basis.
Catchphrase?
YAURAUGAAAUUUUUUUAAAAAAAAWYOOOOOOOWLAAAAAAAAAAOUGGGGGGHAAAUGH!

Favourite Habits?
As I’m not as young as I was, my hobbies are largely confined to yowling as loudly as felinely possible at 3am every night while staring blankly at a wall. I also very much enjoy sitting calmly outside the house and gazing into the garden while making a sound like an extremely distressed haunted baby, which has led to several complaints from neighbours. As you can see from the photo above, I also very much enjoy lying in a tiny triangle of sunshine while staring accusingly at passers-by.

What constitutes a perfect evening for you?
After a crazy, back-twitching half hour of skittering insanity where I charge wildly around the house to build up an appetite, I’ll have a delicious meal of expensive kidney and thyroid medication mixed with some equally expensive renal food from the vet. I’ll then instantly forget that I’ve already been fed and repeatedly and loudly demand more food, then overeat and do a big sick on a rug (avoiding easy to clean surfaces like wood, tile or lino flooring- where’s the fun in that?).

Favourite food?
Though I do enjoy a nice pouch of Whiskas Senior or twelve, I have to say I’m a sucker for those ‘Dreamies’ things, though it’s not really the right name for a bite sized chunk of Bovril flavoured cereal. I think ‘Meaty Grit Lumps’ is far more appealing, but for some reason they didn’t reply to my letter suggesting that they change it.

Defining moment of your life?
It was quite hurtful, really. My family were holding a very pleasant barbeque in the garden. As I’m a well-bred and distinguished gent, I knew that it was my responsibility as a guest to bring a gift for my hosts, but for some reason they rejected the dead squirrel I deposited on the grill. Not only that, it became the source of barbed jokes about my sense of etiquette for years to come. They call it ‘Nutty The Party Squirrel’ and tease me about it constantly. They really have no class at all.

Any enemies?
Every single other cat who ever lived. Particularly the big, fat, gormless one I was forced to live with for a while in Lancaster called Rajah. The fact that I outlived him is a constant source of joy. Now, if you’ll excuse me, I have to write an irate letter to the Daily Mail about immigrants.


If you could do one thing to make the world a better place for felines what would it be?
Give cats the vote! I think it's disgraceful that cats are excluded from political debate in this country. I recently ran for local office (I was the UKIP candidate) but lost by a small margin as my supporters weren't legally allowed to vote for me. What's worse: I was disqualified from future elections due to being too easily distracted. This kind of open prejudice shouldn't be toler....hang on, is that a vole?

If you could meet a celebrity who would it be and why?
Probably that saucy Mila Kunis woman. She looks like the type of lady who'd be interested in a handsome silver fox with solid right-wing views. I could wake her up for early morning location shoots by making my patented 'confused dolphin gargling with marbles'  noise.

Which one of the cats in Under The Paw and Talk To The Tail  would you like to be stuck in a lift with?
It has to be my peer and lookalike  The Bear. As we're both the same age, we could while away the time reminiscing about our 1990s childhood: specifically the ultra-satisfying feeling of urinating on discarded Global Hypercolor T-shirts then watching them slowly change from pink to green. 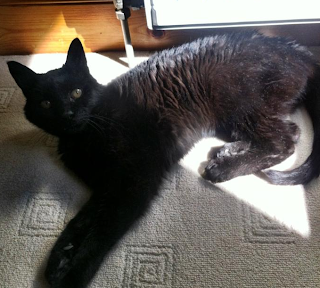 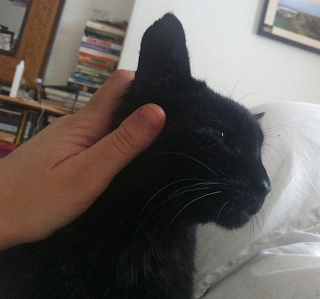 Do you think he knows that the Bear is probably a lefty?

Do you think he knows that The Bear is almost certainly a lefty?