Guest Cat Of The Month For September: Taz 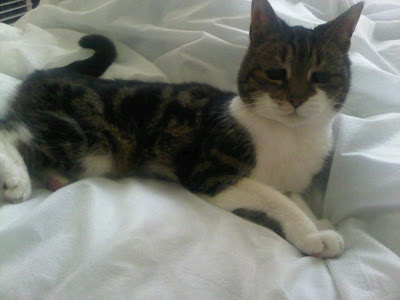 Catchphrase?
Hello? Did I say you could stop stroking me?

Favourite Habits?
Headbutting people until they stroke me, taunting our stupid dog

What constitutes a perfect evening for you?
It’s raining, Tamsyn is home and there’s a fire in the grate. After an hour or so of intense stroking, I’ll dine on tuna and milk. Maybe I’ll freak the rabbits out with a death-stare or two. Then I’ll sit at the kitchen window and watch the dog snivel as she gets colder and wetter, until she succumbs to pneumonia. But I’m sure that’s pretty much everyone’s perfect evening.

Defining moment of your life?
Death leap from a second floor window to land on next door’s terrier. Actually, it was more of an accidental tumble, but don’t tell anyone that.

Any Enemies?
Duh. The dog. Seriously, she makes George Bush look like Einstein.

If you could do one thing to make the world a better place for felines, what would it be?
Round up the dog population and give them one squeaky toy between the lot of them, then sit back and watch the fur fly. Failing that, I’d make those cheesy little cat treat things free on the NHS. They’re so moreish.

If you could meet a celebrity who would it be and why?
I’d like to meet George Clooney. He looks like he knows how to tickle under a girl’s chin just right. Mrrrrrrraaaaaooooow!

Which one of the cats in Under The Paw would you like to be stuck in a lift with?

I’m more of a lone-kitty type but if I had to choose, I’d say The Bear. We’re both a little challenged in the eye department and he looks like my namesake, the Tasmanian Devil.

I don’t remember much before Tamsyn and I became flat-mates but I do know those early years together were pretty wild. I lost count of the number of times I woke up on top of the wardrobe with no collar on and no idea how I got up there! Then The Screamer came along and it was all nappies and early nights. Before I knew it, I was being squashed up against a sticky face and having tea parties with Barbie.
Then the other cats moved in and I entered my darkest days. Those kitties were bad-ass cats and I preferred to roam the neighbour’s garden than come home. It was a relief when Tamsyn left the bozo she was with and it was just the two of us again. And The Screamer, of course, but by this time she’d grown out of tea parties and I didn’t mind her so much.
Everything was ticketty-boo until the dog came. I think the stupid creature actually thinks I like her. If only she knew I spend every waking moment planning her death. I mean, what kind of animal wags its tail when it’s happy? Once she’s out of the way, I can go back to doing what I do best; helping Tamsyn write her books. What, you really thought she wrote them on her own? Don’t make me laugh – I’m her right-hand cat!

Taz (and Tamsyn) write books for children and teens – find out more at www.tamsynmurray.co.uk 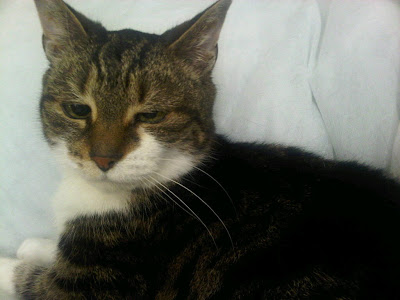 Ugh. There'll be no living with her after this...

Well done Taz. My cats are impressed and a little jealous.

Great minds think alike, especially on the subject of (dogs), Taz. What a cat! ;)

Thanks Taz, now my cat wants her own blog and Twitter account, too. First the squirrel, now Tux...

But anyway, it was lovely to meet you and it's good to know the truth about the writing credits. ;)

Taz you are very cute. Squeaky says he also hates dogs and gives you a high-paw-five

Helen - I am a proper celeb now (not that you can really tell; I always act like this)

jmuhj - Awesome! Inbox me or something, yeah?

Kath - Yeah, Tamsyn doesn't want the world to know about the writing thing and sulks like you wouldn't believe whenever I mention it. In fact, she's probably throwing up on the duvet right now *rolls eyes*

Love the top photo, he has the 'hollow head' look one of mine sometimes gets in photos where his eyes look totally black like his head is empty.

p.s. meant to say I think Taz is protesting just a wee bit too much about the dog. I think it's love, really.

Julie - The black eyes are what I use on the rabbits; freaks them out like you wouldn't believe. As for the dog, forget it. A cold, wet nose in the bottom shouldn't be anyone's way of making friends.