The Under The Paw Toughest Cat Competition: The Winners

Thanks to everyone who sent in photos for this year's Little Cat Diaries Toughest Cat competition (over 500 in total), and commiserations to those who missed out (although slightly less heartfelt commiserations to those who thought, through good shutter timing, they could pass a gentle yawn as an example of growling terror). A contest like this is always going to be tough to judge, but during last year's event there was at least a clear winner. This time it was much more closely run. I've even decided to give an extra prize, partly to acknowledge just how evenly matched the winners are (to narrow them down to four has been hard, but to narrow that four down to three would have been impossible). To be perfectly honest, on a different day, in slightly different moods, The Bear and I might have given any one of them first prize, but a decision had to be made, and we will just have to deal with the poison paw letters that inevitably result from it.

In first place, and winning a pen-and-paw-signed copy of the paperback of Under The Paw, a signed copy of Dewey by Vicki Myron, and a signed copy of Vicky Halls' The Complete Cat: Greebo, from Kate Viscardi. What's noticeable about Greebo is his effortless aura of malevolence, combined with the very definite sense that he is coiled for action. Unlike so many cats submitted, he's not trying to impress us. There are no props (although he does bear a certain resemblance to Prop Joe from the TV show The Wire). He's not growling or raising a paw. Yet there's something genuinely, awesomely immovable about him. I've spent a long time pondering what he's staring at in this picture. It could be a human, a rival cat, or a leaf. Whatever the case, you can be sure it's shortly going to Get It in a fairly major way. 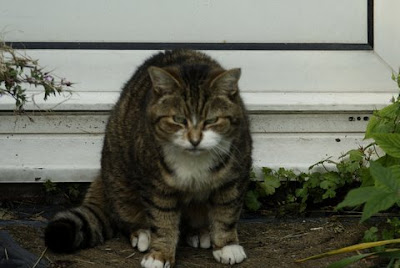 Of his victory, Greebo says: "I worked so hard for this. Being small I had to work out twice as much to keep these muscles in trim. Look at them: rock hard! I'm small but tough. I was born under an outdoor aviary and grew up knowing it was my responsibility to kill rats and protect my family. I want to thank my adoptive mum, who was a collie-cross and put up with being attacked and walking round with me hanging off her tail. Jess, I still miss you!!"

In second place, and winning a pen-and-paw-signed copy of the paperback of Under The Paw: Cuba, from Naomi Kenton. Cuba, your narrowed eyes make me feel sure I have wronged you in some unforgivable way, you clearly have a large fanclub of terrified minions, and that fang really adds a finishing touch to your American Gangster aura of ice cold intimidation. Please rest assured that your failure to take first place has nothing to do with the other photo submitted by your human, where she had dressed you up in a camp little witch's hat. 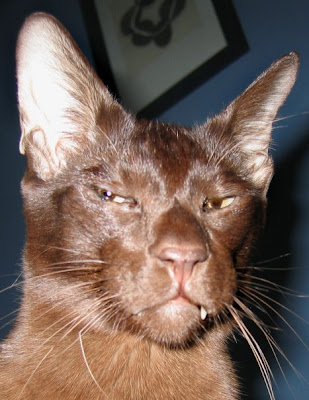 In third place, and winning a pen-and-paw-signed copy of the paperback of Under The Paw: Scratch, from Hayley Hart. I have no idea what Scratch is attacking in this photo, but that probably doesn't matter, since it has clearly been torn limb from limb, and retains only the faintest resemblance to its original form. If this were a Most Psychotic Cats contest, Scratch would have taken first place (with birdman Luke - see posting below - a close second). 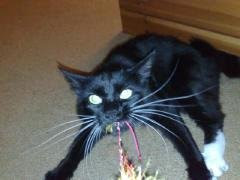 In fourth place, and winning a pen-signed and paw-signed copy of the paperback of Under The Paw: Furball, from Lindsey Jackson-Kay. I've tried not to be swayed be extraneous details about these hardest of cats. If someone has included a passage with their photo claiming that their cat once decked a squirrel with one paw behind their back, I have done my best to ignore it, and focus purely on the image in hand. That said, I'm not sure I can entirely claim that my decision to award an extra prize for Furball hasn't been influenced by hearing about her hardscrabble beginnings and her rehoming via Facebook. Furball is clearly a star of brilliant, unrivalled grumpiness, and I can only dream that one day I have a cat like this working as my house's own resident Greeter. 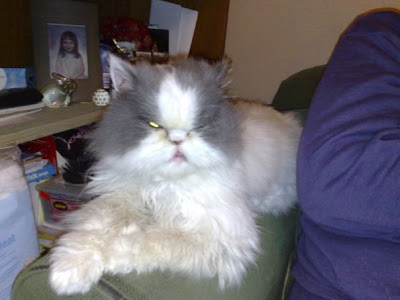 Congratulations to all the winners especially Greebo...Well deserved I think...:)

Congratulations to all the winners especially Greebo...well deserved I think...:)

If your going to name a cat Geebo, it's a bit of a self fulfilling prophecy that he's going to be a bit of a hard faced nutter. Well deserved win!

congrats, Greebo--you're a credit to your Pratchett namesake =^.^=

BirdMan Luke is pleased with his Honorable Mention and hopes you will let his human know when the World's Most Psychotic Cat contest is ;-)

Congrats Greebo, Cuba, Scratch and Furball - you were honorable opponents, and deserving of your spoils, he says.

What a fun way to avoid paying bills and doing house chores for the last 2 weeks!!

LOL very well deserved prizes I think!
Congrats to all the winners!

CUBA is most definitely The Toughest Cat in my book; but conCATulations to all of the winners, and to my own Suha The Terrible, who did not win but who IS in fact, the toughest.

These are great... and hysterical!

I'm glad I'm on this side of the computer screen, a nice safe distance from these tough cats' wrath. :)

Congrats to all the winners!

(After seeing these fabulous shots, I'm not even remotely upset that my cat didn't win -- no competition! Haha.)

Just a thought, who would win the ultimate"paw off"? Rufus bug cat or greebo?

excellent choices and hard to choose between them. I admit (whisper) they knock my Barney into a cocked hat. Just don't tell him I said so - I value my ankles too much.

On behalf of my own Greebo I'd like to congratulate all the winners but of course especially Greebo! It's nice to know we're not the only people who call their cats daft names...

they all just look really cute to me!

Oh, I aim to read "Under the Paw", and these are super cat photos.
The book seems hard to buy in the USA, why oh why?