The Knack... And How To Get It 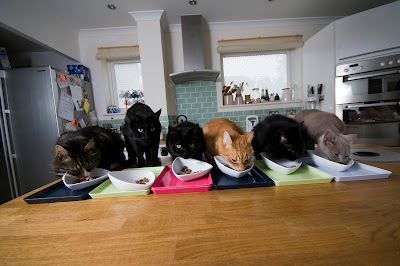 When announcing that it's dinner time for my cats, I've always felt that a simple high-note, low-note whistle gets the job done most effectively. It's simple, saves me having to embarrass myself in front of neighbourhood ruffians by calling six faintly ridiculous names in a soppy voice out of the back door, and, after more than three decades, I can up its volume impressively at will (or perhaps not so impressively, if you are one of the women who play bridge at the Conservative Club nextdoor). However, I recently decided it was time for a change, so, for the forseeable future, when feeding Shipley, Ralph, The Bear, Pablo, Bootsy and Janet, in place of the "somewhat overexposed and grating" (Whistle Monthly Magazine, 2004) Tomwhistle, I've decided to play my vinyl copy of 'Get The Knack', the 1979 album by The Knack - more specifically, their American number one single 'My Sharona'.

I can't explain quite how this started, other than to say one night I just happened to be listening to the song at jellied meatslop dispensing time, and its addictive, jerky (some would say spastic) rhythms seemed somehow highly appropriate to the whole manic process of feeding half a dozen manic furry forces of nature... particularly when Pablo misjudged a jump from a chair to the kitchen worksurface, and ended up divebombing unceremoniously into a shelf of cookery books.* There's also the fact that, if you're going to train your cats to come to the call of music, you've got more chance of doing it with a rudimentary three and a half-chord geek anthem than with something from the third Van Der Graaf Generator album.

I know that moggies have sensitive hearing, but I'm still not convinced of just how sensitive those same ears are to the nuances of power-pop melodies. A few years ago, when I lived nextdoor to a wannabe techno DJ noise pollutant, and his racket was at its most Satanic, Shipley, The Bear and Ralph often scuttled out of the house with their fur standing on end. That said, if you were to ask me whether, say, Pablo preferred The Romantics' 'What I Like About You' or Badfinger's 'No Matter What', I couldn't tell you. The early signs, though, are good. I've only been playing 'My Sharona' for about a week, but Dee reported that tonight, the second the opening chords kicked in, The Bear's ears pricked up, and within a few seconds he was ambling up the stairs (like Paul Cicero in Goodfellas, The Bear don't move for no-one). It's hard to tell just how well they're responding, since all six of them are permanently hungry at the moment (Dee claims this is because they are "making sure they're well-upholstered for winter", I claim it is because they are increasingly indolent and spoiled), but I'm going to persevere, and report back on the experiment's progress in a month or two. By which time I will almost certainly be wishing I'd opted for 'Surrender' by Cheap Trick instead.** 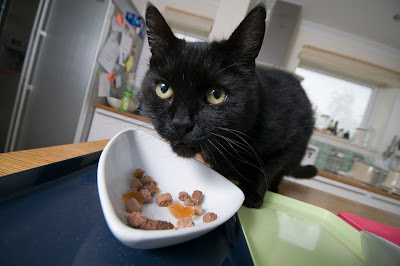 * I probably should also point out that I was drunk at the time.

** Already, I'm getting a little too familiar with The Knack's underage girl-obsessed lyrics (in case 'Sharona' wasn't enough, just to make sure they got their point across they also put out an album called '... But The Little Girls Understand'). How did I not previously notice the full extent of how dodgy they were? "Such a dirty mind/always get it up for the touch of the younger kind". First my reworking of Foreigner's lascivious 'Hot Blooded' into 'Hot Tabby' for Ralph, now this. Is this really the kind of thing that innocent felines should be exposed to? The lusted-over Sharona in question, incidentally, now works as a successful realtor.


Images courtesy of Jason Bye.
Posted by Unknown at 11:41

If you fancy enticing your cats with something a little more cerebral than The Knack, I gather they are quite keen on Yes, particularly the extended middle section of 'The Gates of Delerium' from 1978's Relayer album......although it could result in quite a long mealtime.

Hmm, mom probably would have gone with something different, like classical or at least classic rock. Usually she doesn't have to call us to dinner we're already standing at the feeding place waiting!

It's an amazing photo of your 6 cats - not swopping plates, no hitting of noses - all eating at the same time - amazing.

I think my ideal would have been something from the second Atomic Rooster album. Unfortunately, The Bear is adamant that 1976 is his musical Year Zero.

What a cute picture of all the kitties!

if you get sick of The Knack you could always try the Veruca Salt version....which i personally like a bit better (that may be a Gen Y thing tho). Squeaky is more of a WuTang cat...

I love your blog! I am a huge cat lover myself! I paint them part time...and I must agree with the amazing picture comment...they are so sweet! You must check out my website :) I think you would get a kick out of the paintings! :)

I think that an alternative slice of 80's gorgonzola could be The Heat is On" by Glen Frey, or "Whip it Good"...

Just how did you get them all eating from individual bowls? It's more like a pirhana feeding frenzy in my house (and that includes the dog trying to hoover up any dropped bits). As for needing music! I just have to set foot in the kitchen.......