The latest littlecatdiaries post is a very generously donated guest blog from Tim Relf, cat-lover and author of the novels Home and Stag. I've also included a picture of Tim's ineffably cute (now fully grown) kittens Nutmeg and Parsley below. If you'd like to know more about Tim, visit www.timrelf.com...

"My work colleagues have introduced a ‘cat tin’.

So bored are they of me talking about my two that they’ve put said item next to my desk. The deal is simple: if I mention Nutmeg or Parsley, I have to put a quid in for charity. Let’s just say the local hospital got a nice donation last Christmas.

I talk about them a lot, I know that. Friends have started using the word ‘obsessive’. It’s not normal, they whisper, for a man to talk about his cats so much (“banging on about them”, is an expression I’ve heard used).

In hushed tones, they say it’s gone beyond a joke. That it’s not quite right for a supposedly professional man – a man with a mortgage and a Ford Focus, for goodness sake – to stand on a shed under the light of the moon shaking a box of Go-Cat.

A cat on a shed, people tell me, is not interesting as a topic of conversation. It’s merely, well, a cat on a shed. Somehow, however, when it’s your cat, it can be.

Trouble is, I find them fascinating. Fascinating, funny and relaxing. Spells of illness and expensive vets’ bills (distressing as they’ve been, both to the cats and to my credit card) have only made me more fond of them.

Plus, this past 18 months since we got them has been a series of milestones, so there’s been plenty to talk about. Their first day out. Their first foray beyond the garden. Their first ascent of the shed/ extension/next door’s garage. Their first kill (a slug under the patio table – hardly reminiscent, admittedly, of their noble cousins on the Serengeti, but one they were proud of nonetheless). Their dietary habits (Nutmeg goes wild at the smell of curry), their markings, their interaction with each other and neighbours’ cats. Anything, pretty much, given the chance.

I should explain. I’d always wanted cats, having grown up with them – but living in a succession of upstairs flats, shared houses and places near busy roads had prevented it happening.

So, when we moved to a quiet street last spring, I wasted no time. I opened negotiations with my other half, Isabel, asking for three. As a confirmed dog person, she had only reluctantly agreed in fairly vague terms to discuss the prospect of ‘a cat’. She was adamant we should limit it to one. In the end, we settled on two (the killer blow came when a friend of mine who works at a vet’s said it could be cruel to get one as it might get lonely.)

Since then, my ‘interest’ has snowballed. Friends email me daily links to cat websites. Post me stories cut from newspapers. I didn’t get a single card for my birthday this year that didn’t have a cat on it. Christmas presents – mugs, calendars, ornaments, paper knives – are without exception cat-related.

I’m on first name terms (mates, almost) with the vet and the lady who runs the cattery. I still swap the occasional email with the lady we got them from.

I’ve found myself sharing in great detail, often before I’ve realised I’m doing it, their little triumphs and tribulations with anyone in the vicinity. One colleague has taken to calling me ‘The Cat Man’.

Yesterday, it occurred to me – and even I had a flash of panic that maybe it was getting out of hand when it did – that perhaps I could have Parsley’s miaow as my phone’s ring-tone.

So, I breathed a big sigh of relief when I read Tom’s book. I mean, it wasn’t just me. There were other people out there who were the same. This was normal (well, relatively normal.)

I saw a woman on TV recently who had 30 cats. I thought immediately of the phenomena Tom mentions: Mad Cat Woman.

‘You’re exactly like her,’ Isabel said. ‘Only you’ve got fewer.’

‘I’ve been meaning to talk to you about that,’ I replied. I’d been waiting to catch her at a weak moment to float the prospect of a third. Or possibly another two. That’s the thing about cats: they’re addictive.

‘No chance,’ she said, having heard my suggestion.

Clearly, there’s still some negotiating to be done (so any advice on persuasive arguments I could employ would be much appreciated!)

Two more cats. Can you imagine. I suppose at least the local hospital would be guaranteed another good donation next year." 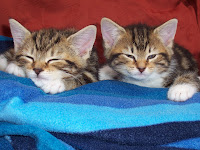 What a great blog, it made me laugh a lot. Our situation was very similar with me having to convince my boyfriend, a dog person, for a cat. Unfortunately I only persuaded him to get one, but he's so won over by little Charlie that he even texts me photos of him when I'm out of the house!

My husband is a dog person really. But I think he secretly loves our 4 cats. Great blog, Mr Relf.

I found bribery works really well. I have six cats working on getting the 7th one now but my husband is a Cat Man so it's not too hard to convince him.

Great Blog - Cat's are addictive I'm glad that other have the same addition maybe we should start the CA (Cats Anonymous)for severe additions as I have a serious problem!

I find bribery works really well. I have six cats and I am working on getting a 7th but my husband is a Cat Man so it’s not too hard to convince him.

Cat’s are addictive I am glad other people have the same addition maybe we should start the CA (Cats Anonymous) for those with server addictions as I have a serious problem.

Great Blog by the way.

great blog, I have 2 and would like more but am not sure its fair on them as our house may not be big enough! Both of mine are rescues and when i think of all the other poor cats in shelters waiting to be taken home I do get tempted. Luckily hubbie is happy with our two although he has said 4is probably the max number he would consider so if we ever move to a bigger house....and he was a dog person too, started on him gently and now he is smitten with our two :-)

Hey, Tom, We finally got a review of your book posted. Sorry it took so long. But at least one person hadn't heard of it yet, so it's not really late. :)

The only advice I have for getting another cat (or two) is to wait. If everyone now knows you as the "cat man" eventually, a stray kitten in need of a loving home will surface. In which case, your significant other will be hard pressed to deny a home to the orphan. It's worked for me three times!

Please don't worry about this phenomenon. My previously-only-every-had-dogs-as-family-pets husband best friend in the world is a ginger & white moggy he named Steve. Steve came to live with us because my dog loving hubby thought that our cat Ella was a. lonely & b. outnumbered by the neighbour's cats.

A great read here... amusing, insightful... and, loaded with truth.