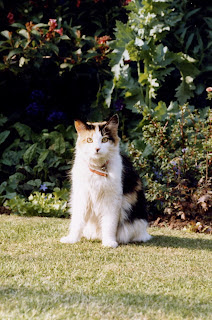 A NOD AND A WINK TO A SLINK: a rare excursion into verse in tribute to my old cat Daisy, AKA The Slink 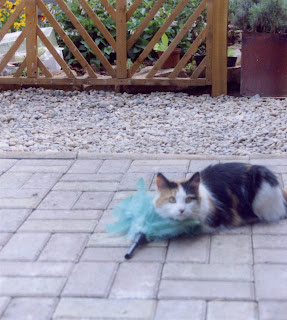 Talk To The Tail: Adventures In Cat Ownership And Beyond.
Posted by Unknown at 04:02

What a lovely tribute. Brought me to silly sad smiles and a tear.
Cheryl ~ mom to the Beastlies

What a sad occurence and great verse in honour of a moggy passed. I live near Nottingham DH Lawrence country and your emulating him well.

Having been owned by a cat of similar temperament I can understand the feelings expressed and so beautifully put.

You wrote a wonderful tribute and beautiful poem. God bless Slink. I lost my furry friend last year and I am still working on a tribute for my "Spooky". You did a great job.

Thats a lovely tribute and i too had tears in my eyes. its hard losing a friend (i lost my beloved shorty in April) keep your chin up and remember the good stuff
tasha

(Echoing the other posters' comments and adding my own sad, tears, deepest condolences and empathy thereto). What a little beauty Daisy was -- and actually, a calico, btw. There's one in our family, too: beloved, totally unpredictable, with Calico Attitude for miles, Maryam is very much loved.