Guest Cat Of The Month For September: Fatima 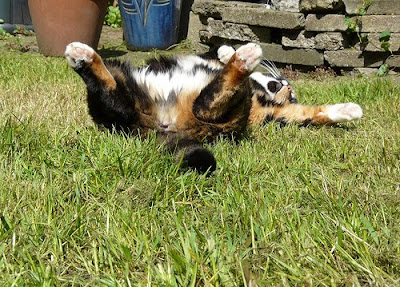 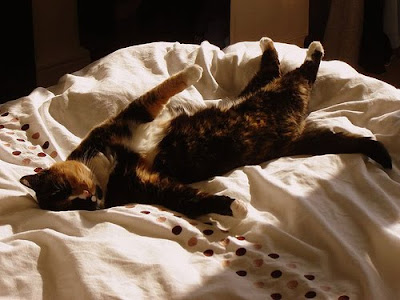 Favourite habits?
Munching yum yums; sitting on objects even if patently more uncomfortable than sitting on the floor next to the object; munching yum yums; licking glue off envelopes; licking filing cabinet; licking door of The Cupboard of Joy (yum yums depository); snoozing; staring at him ‘til he feeds me; destruction of shoes/furniture; munching yum yums; using litter tray and THEN GOING OUTSIDE. He hates that. I know, you’re wondering why he bothers with the litter tray at all if I am willing and able to go outside. Well, if he takes the litter tray away, I still go indoors, on the floor or carpet. AND THEN GO OUTSIDE! I know! I contravene all documented feline instincts! You think that’s demented? Get this – sometimes when he’s opening the Cupboard of Joy I get so excited by the prospect of yum yums that I have to poo. But I can’t risk being stranded on the litter tray when the yums hit the foodbowl – I HAVE to be there in time to get my face in so fast that the last chunks of gravel actually bounce off the top of my head. “That’s right!” he’ll say. “Don’t risk it! Get in there quickly, before the other ten cats that live here and compete for your food have a chance! Because obviously your experience of living here for the last eight years has shown you that if you don’t eat the food within thirty seconds of its arrival, it will evaporate!”. I haven’t seen these other cats but obviously I can’t risk it. (Owner’s note: I suppose I should have realised that sarcasm is beyond the ken of a cat that thinks every window leads to a different outside) – So basically, I just shit on the spot. Right on the floor, even as I’m staring up at him and the yumbag. Listen, no kitty wants to find themselves tethered to the ol’ poop deck when the munchy manna starts raining from plastic bag heaven, so I’ll squeeze one out where I stand if it means cutting down my journey time to the foodbowl by so much as a heartbeat. Greedy? I wrote the book. Then ate it. Where were we? Oh yes, habits. Depositing fluff; nonchalantly wandering into kitchen when I hear the sound of food prep, as if I didn’t realise that was what he was doing; sniffing air vent; licking molecule-sized food remnants from bowl/floor. It’s mainly the eating and sleeping to be honest. I am obsessed with munching yum yums. I don’t even wait by the bowl. As he opens the Cupboard of Joy, I get in position nearby, then, without taking my eyes off the bag, pad backwards towards the bowl as he brings the yum yums over, like a fielder getting in position for a steepling catch in the deep.

What constitutes a perfect evening for you?
Munching yum yums. That’s the main one. After munching, I like to stagger out of the room towards the soft things of the flat. At this point he usually amuses himself by saying “Any dessert? Perhaps a coffee? Madam..?” I ignore him. Later he’ll join me in the living room where he likes to look at the flashing box. I’m not lithe enough to leap directly onto even the lowest sofa any more, so I half-jump on, sink in my claws and clumsily drag my way up, expertly rending fabric as I go. He usually shouts something about £850 at this point but I don’t know what that means. Once I have achieved the summit, I will generally mungle about (this is what he calls my vague, unsettled meandering and padding) before settling myself on as many remote controls as my ample undercarriage can cover.

Favourite food?
Stinky gravel is all I get. Morning and night. (Owners note: Fatima has progressive tooth decay, so is on t/d, a prescription-only food, to try and keep her in teeth as much as possible. She’s already had about three out and is currently eating slightly on one side of her mouth (a tell-tale sign), so I can see another £300 trip to the bloody vet on the horizon. To be fair, she’s right, it does resemble stinky gravel. But at this rate I’ll need to train her to use a straw soon.)

Defining moment of your life?
At some point in my youth I dislocated a hip. I don’t know how. But I have always negotiated stairs like a bit of a codger. The day they taught self-regulation of food intake at kitten school was important too. Because I was clearly bloody absent.

Any enemies?
I have seen off several. (Owners note: she means she has hidden inside until they have moved away or lost interest. Ghost cat, Ginge, The Masked Avenger and Giant Pooch have all been and mostly gone.) My biggest enemy is within, though – The Blue Monster. I leave my fluff on the furniture and The Blue Monster eats it through its long trunk with variety of attachments! It clearly wants to eat me. I am the motherlode! I scramble away every time I hear its roar. And the worst thing is, he’s in league with it. Whenever it comes near making its unearthly whining-sucking sound, he’s always there, encouraging it, driving it on.

If you could do one thing to make the world a better place for felines, what would it be?
Ban cupboard doors.

If you could meet a celebrity who would it be and why?
I don’t know what that means. I like to meet humans bearing yum yums. Anyone with yum yums.

Which one of the cats in Under The Paw would you like to be stuck in a lift with?
The closest I want to get to another cat is Pickle, who is permanently separated from me by two windows and a street. We sometimes peer at each other. That’s close enough, thank you.

Biography?
I don’t remember much. He got me from Southall Cattery in 2001. I didn’t like it there – too many cats, not enough yum yums. Since then, I have settled in nicely and started my own business selling mouse glue, made from boiled-up mouse bones. I’m too slow to catch the mice myself, so I have to buy them in, which means my margins aren’t that great and it’s a very competitive business. I hope to have a display stand at Glubbex ’09, Europe’s leading mouse glue expo, taking place later in the year at Olympia. I am also currently developing a new range of signature stinks for Spring ’10, based around the eternal themes of poo and wee. He doesn’t know about any of this, of course. Can you imagine?! I do my work while he’s out of the flat. (Owner's note: I'm glad Fatima's brought this up herself, as this level of understandably fictitious-sounding detail might sound troubling coming from a forty-year-old bachelor who doesn't even have the excuse of kids' imaginations to fertilize).
Now, give me yum yums. 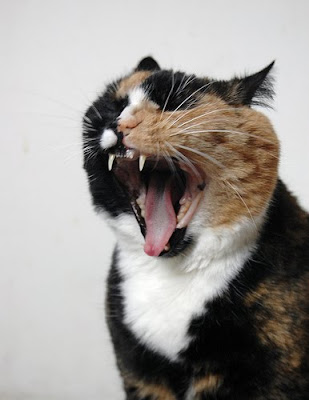 (Last photo courtesy of Jennifer Whitehead.)
Posted by Unknown at 12:58

Fatima you are just lovely - I've served greedy cats in my time but never met one that would poo on the floor rather than miss dinner (I suspect you are actually leaving a little gift for your Yum Yum Man he is failing to recognise). 3 out of 4 of the cats who have allowed me to share their lives have been Torties - you're something special kid x

what a gorgeous girl!

Fatima, you are beauteous in the colorful extreme! We love you and we are glad your person is as good as he is. We do wish, however, that he would not give you such insulting nicknames and talk about such private business so roughly. Despicable. Simply despicable. You are, after all, a LADY CAT of good standing.

Fatima, you are one fabulous looking cat and what a unique name!

Fatima you are hilarious. You have an amazingly well developed turn of phrase for a cat too.

That is a LOT of personality for one cat. What a smashing girl.

Ah, beautiful Miss Fatima - clearly a ladycat after my own heart! I am on that t/d stinky gravel too, but I get a bit of Felix to go with.

What a lovely cat you are Fatima! Very beautiful! I've never heard of a cat called Fatima before, in fact I've only every heard of one person named Fatima!

We think that you are a furry good selection for September. You look like fall leaves from the trees☺

Thanks for all the lovely comments when I , ahem, Fatima posted this.

Sadly, after a spell of kidney disease, Fatima has today left us in the most peaceful manner.

Though just before she was put to sleep, she managed a poo on the vet's table. Fatty for the win.

She will be much missed and often thought of.