Click here for updated pictures (thanks to the Christian Monitor) of the Japanese Cat Cafe!
Posted by Unknown at 13:42 5 comments: 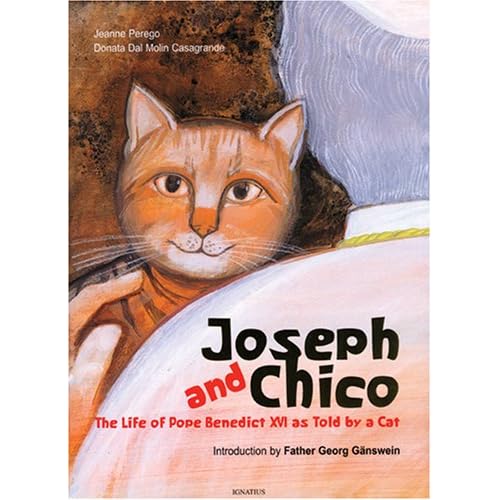 Well, another celebrity cat has gone and trumped feline detective scribe Sneaky Pie. This new children's book about the life story of new pontiff Pope Benedict XVI is supposedly told by his cat, Chico.
Posted by Unknown at 13:18 1 comment:

The Panic Mouse: Possibly The Most Underwhelming £22.99 I Have Ever Spent On My Cats

The Panic Mouse is an electronic toy that was recommended to me by Alex, a nice vet in Liverpool who I interviewed on behalf of the Daily Telegraph Magazine about his overweight pets clinic. He showed me a film he'd made, which featured his own - rather portly - cat lost in the toy's rhythm, hurling itself athletically about while Alex and his partner watched TV. It looked like hours of fun and just over twenty quid seemed a reasonable price to pay to see my cats shaken out of their pampered ennui and prompted to do backflips around the living room, so I immediately ordered one.

To quote the product's promotional literature: "Revolutionary in design, its built-in computer board signals a battery-powered motor, creating random and unpredictable 'mouse-like' movements. More than just toys for cats, Panic Mouse interactive cat toys provide hours of fun for both pet and owner. The plastic wand bends and contorts, bouncing back to its original form. The illusive object of cat curiosity: An artificial fur pouch that feels and acts like a real mouse. Crazy, wild, and full of surprises, Panic Mouse cat toys are the much meowed-for answer for playful cats everywhere. Never a dull moment, Panic Mouse is there to keep your pet happy for hours on end."

As you will see below, The Bear, Ralph, Shipley, Bootsy, Janet and Pablo may beg to differ...

Cat Poo Coffee, as seen in the Daily Telegraph. I may have already drunk some unwittingly, but who'd have thought it'd be so expensive?
Posted by Unknown at 13:54 1 comment:

An Engineer's Guide to Cats

Golf And Cats: The Way Forward

The late humourist Alan Coren was once informed that the only books that sell well are about cats, golf and the Nazis. Coren then went on to test this theory, in 1975, the year of my birth, by writing a book called Golfing For Cats, featuring a swastika on its cover. The book is well-known, but presumably never matched the combined sales of Meg And Mog, Nick Faldo's autobiography and Mein Kampf, since it is now out of print. Presumably it's very funny, but I'll be damned if I'm spending £40 plus for a copy on amazon marketplace. I have yet, and am unlikely ever, to write a book about Nazis, but I have now written two books about golf, and one about cats. While I am still unconvinced about these two subjects' guaranteed commercial potential, I think it is possible that they are more comfortable literary bedfellows than they might at first seem. Granted, most people I know who like golf don't particularly like cats, but I have met plenty of cats on golf courses, and they always seem perfectly happy there. "Come on, Coxy, you soppy git!" shout my playing partners, as I tickle the tummy of the rolly-polly torty by the sixth tee and keep them waiting, but could it be that they are the ones missing out on an intrinsic part of a good walk spoiled? My Cats have popped up in both of my golf books - albeit usually only to urinate on my golf bag - and golf pops up in my new cat book. My last book featured a quote from PG Wodehouse about golf; this one features one from him about cats. When I visited the NEC Golf Show last November, the Supreme Cat Show was being held in the adjacent hall. Coincidence? I think not! In fact, it's quite possible that, in my previous writing, I have barely scratched the surface of the natural interface between two of the defining interests of my life.

At the moment, I'm starting work on a new book, in which neither golf nor cats are a major part of the narrative. After this aberration, I will be back on my true creative path. The list below represents just a selection of my future books about cats and golf. If it seems rather rigid, what can I say? When you have found your righteous road, you must follow it through unswervingly. And while my editors and agent may express concern for the lack of obvious Richard And Judy list potential within, I must retain the mindset of an artist, and not be swayed by the commercial concerns of others. (And, besides, I feel fairly confident that each title on it will at least sell better than my second book, Educating Peter.)

Around Ireland With A Fridge, A Moggy And A Putter (Simon And Schuster, 2012)
What happens when a thirtysomething author is bet by one of his golfing mates that he can't cart his decrepit evil genius cat The Bear, his putter and a fridge around the emerald isle? Upon drinking in a Dublin bar, where does one put their feline for safekeeping? What is the local rule on hairballs in bunkers? And what the piss does a fridge really have to do with all this? Find out in this "elegiac and coruscating" (Ok! Magazine) travelogue.

The Even Longer Tail (Simon And Schuster, 2014)
An analysis of how Internet culture, while ostensibly making cats and golf clubs more marginalised, has actually given the chance for the less traditionally popular cats and golf clubs (e.g. feral, one-eyed tabbies, rusty secondhand sets of Ping from 1991 with the 7-iron missing) to reach a wider, more appreciative audience.

Pusskerton In Lust (Jonathan Cape, 2017)
Meet Pusskerton, the cat world's first literary detective. When John Pusskerton - aka The Birdman Of Corton Heath Golf Club - wins his Saturday Fourball (not to mention the plaudits of the Lady Captain), he's set for a relaxing weekend away from the pressures of being a private eye in an unrealistically lush and bucolic part of Britain's home counties, but on the way home he makes a surprising discovery in the bushes by the eighteenth hole. Whose severed arm is it that he found there? Does this have anything to do with Sampson, his old golfing rival (and local pimp)? And what will happen when he crosses paths with the Lady Captain's husband. local Chief Constable John "The Whiskers" McGee? "An irresistible whodunnit and a perfect slice of Little England for that vast group of the population who love Miss Marple, PG Wodehouse's Golf Omnibus and Vicky Halls' Cat Confidential with an equal passion." - Farming Weekly.

After The Cat Fight (Barn Bird Books, 2021)
Adapted from the successful News Of The World column, an in-depth study of the events during and after the 2020 Ryder Cup, when the wives of the American team famously stormed onto the green, with their cats, before the European team had had chance to finish putting.

Scampi (Barn Bird Books, 2027)
Tom Cox journeys back to his childhood golf club to collect the memories of the aging members about Scampi, the overweight, long dead clubhouse cat. ""Rarely have I read anything quite so specific." - Golf World. "I didn't feel that I truly understood golf after reading this riveting aural history, but I felt that I had begun to understand Scampi: the things that made him love golf. The things that made him love cooked fish. The things that, ultimately, irrepressibly, made him him." - Your Cat Magazine.

The Cat Walkers (Mirror Mirror Vanity Publishing, 2031)
It's early morning on the Norfolk coast and all is quiet. But what's this coming over the horizon, through the dew? Twenty pompous men in plus fours! And what are those four-legged, slightly uncomfortable furry creatures at their feet? "I'd really thought it was only dogs that got walked on golf courses, but Tom Cox has enlightened me. He's really done his research here, spending time to find out just what motivates this extraordinary, obstinate subsect of golfing society." - Golf Club Secretary Magazine.

Pusskerton Back In Action (self-published, 2040)
Sipping his cup of evaporated milk in his chalet bungalow overlooking one of Britain's most picturesque rivers, Pusskerton finally feels at peace, but when an old friend turns up at the doorstep, brandishing a set of hickory shafted clubs, a mouse spleen, a severed human ear and a copy of Jack Nicklaus' Golf My Way, he realises that it is not quite yet time to put his crime fighting past behind him!
Posted by Unknown at 03:26 1 comment:

Cat. Quite likes turtle. In Australia.
Posted by Unknown at 12:14 No comments:

This just in from Russia, where Malysh (pictured) doesn't really look too up for the little adventure his owner has planned for him. If I was a cat and my owner made me do parachute jumps, I'd wee in his kettle...
Posted by Unknown at 12:06 No comments:

This Ace Records 24-track compilation CD ends the only way it ever could (or should) - with the Top Cat Theme.
Posted by Unknown at 11:53 No comments: