"Has That Cat Just Sniffed Some Spottle, Or Is It Just Not Remotely Pleased To See Me?": A Guide To Four Underacknowledged Types Of Cat Dirt 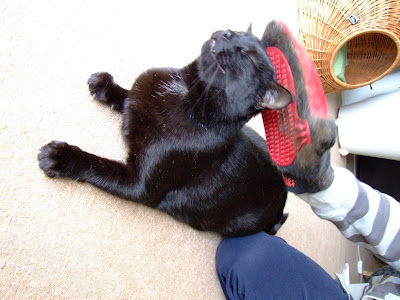 Fruzz
Many cat owners spend literally hours puzzling how, in the course of one small tussle with a fellow member of its species or an energetic cleaning session, a feline can shed what appears to be its entire body weight in fur yet appear more or less physically unchanged. The answer lies with fruzz: a miraculous expanding substance often mistaken for “fluff” and the other less intriguing, hair-related waste produced by more pedestrian animals. Fruzz cannot be truly categorised as Fruzz until it has left the surface of the cat in question, at which point it immediately begins to grow at a rate both violent and imperceptible. This means it is incredibly hard to describe to those who’ve never come into direct contact with it. You can instruct them to picture a protein filament version of a just-add-water instant pudding, but even then you’re only scratching the surface of its true nature.
Fruzz is far from the most unpleasant kind of cat filth, and environmental scientists believe it has hitherto untapped potential for recycling*, but complacency about its existence remains one of the most frequent reasons that moggy slaves tend to underestimate when budgeting for electronic cleaning devices. It is also one of the major unacknowledged elements that separate cat owners from normal civilians in embarrassing ways in the outside world. This is evinced by conversations such as the following:
Cat owner (fondling Miele Aquarius S5580): “So, how does this baby perform when it comes to fruzz?”
Vacuum cleaner salesman: “Mr Babbidge, can you call security, please!? I think we’ve got one of those people from the special hospital in the shop again!”

Crunk
A dangerously adhesive, bitty, saliva-like substance not dissimilar to regurgitated digestive biscuits. Manufactured in an alarmingly large range of colours including Devil’s Night Black, Off Grey and – most popular of all - Carrot Vomit Orange, crunk is most often found on cats’ chins and surrounding areas. Much murky confusion surrounds this enigmatic cat detritus, especially in the case of those unfortunate souls who have been known to mistake it for the energy drink of the same name pioneered by the Atlanta-based rapper Lil John.
The first genuinely disturbing crunk moment often comes when, having assumed that what you’re dealing with is mere spit, the realisation dawns that it is, in fact, crunk, and any resemblance between the colour of it and your cat’s fur is mere coincidence. The second comes about two minutes later, when having turned your back on said feline for a matter of seconds whilst searching for some kitchen roll, you realise that the crunk has vanished. In one way, this is good news. Any cat without crunk on its chin is a more pleasant cat to be around! In another way, it is the worst news possible: you can bet your bottom dollar that that crunk didn’t just disappear into thin air, and its final destination will be a mystery guaranteed to haunt your very soul into the midnight hour and beyond.

Mair
While the phrase “I’ve had a ‘mare” does not signify anything pleasant when uttered by a normal citizen, the phrase always gives rise to an extra shiver among cat owners. Nightmares are one thing, but walking into a kitchen in the stark light of day and finding beloved woks, floors, bowls – woks, floors and bowls that you’d scrubbed to within an inch of your life – flecked liberally with mair is another entirely.
Those who’ve accidentally rested their hand on a shagpile rug or a passing donkey after using Pritt-Stick will have a generalised idea about mair’s fuzzy, sticky horror. But least with pritt stick and a donkey, you know what you’re dealing with. With mair, you’re always on your toes (although thankfully not literally, since that would truly be a sod to remove). “Is the sticky bit in the middle regurgitated wet cat food, or some of last night’s sticky toffee pudding that Janet accidentally got caught in his tail whilst illegally roaming the kitchen counter?” I might ask myself, as I examine some mair. And while you tend to assume that the hairy coating on the outside of the mair in question comes from one of the cats themselves, who’s to say it isn’t actually the product of a vole they killed last night, or a combination of both?
A particular liability to habitual finger-lickers, mair can, with a little effort, usually be removed from skin – one of the stronger types of handwash associated the medical profession will normally do the trick. The problem is as much one of “When?” as it is one of “How?”. Do you clean your hands now, or when you’ve finished sitting on the kitchen floor, crying, and fantasising about a world where there isn’t always at least five cat dishes stained with gribbly bits in your immediate eyeline? Do you do it before you’ve started drying that painstakingly demaired bowl, with that tea towel that might have more mair on it, or afterwards? And even when that’s done, there are the fixed objects around you to think about. Those surfaces might look clean from a distance, but look again. It is a rare occasion, worth celebrating, when a cat owner’s kitchen doesn’t showcase at least one cupboard with a strip of mair stuck to it.

Spottle
“Like Wee, But Even More Long-Lasting And Orange!” might not seem like the most irresistible marketing slogan to most of us, but those who use spottle to disorientate and subjugate their minions will no doubt disagree. Unlike a cat that has flagrantly and expansively urinated on, say, a curtain or a particularly irritating section of skirting board, the spottling cat cannot be so easily singled out as an offender. This is not to say his aim is any less deadly. Quite the contrary: spottling is such a fine art, it has even led some humans to speculate whether their cats have tiny little paint brushes secreted beneath their tails.
“Did that cat just spottle?” you will often find yourself asking, as the culprit gently shimmies backwards into a corner of the living room. “Or is he just unusually fond of our new lava lamp?” Since it can take up to five hours for spottle’s virulent, mocking hues to fully materialise, laying blame is rendered harder still. By the time you’ve concluded that, yes, your cat did spottle on the cover of Richard Russo’s Pulitzer prize-winning 2001 novel, Empire Falls, the culprit is long gone, lazing happily somewhere beneath a fig tree in the garden or spottling on the freshly unwrapped packaging of nextdoor’s new petrol-powered strimmer. Some spottle, in fact, remains invisible forever, and in such cases the only way to detect it is to insert another cat nose first into the suspected area. If the cat looks up from the spot in question with its mouth half-open and a slightly deranged expression on its face, not unlike that of Anthony Hopkins when he smells something that awakes a bad part of him in Silence Of The Lambs, you know that you’re dealing with spottle. Hence the well-known phrase: “Is that some spottle that cat has just sniffed, or is it just not remotely pleased to see me?”. We need to invest in one of those mitt hair removers here.

Cats couldn't possibly HAVE anything remotely construed as "filth". Must be space aliens.

I'm thinking of getting a furminator