A Year In The Life Of A Rehabilitated Stray Cat

March 2014
I move from Norfolk to Devon. Within a matter of days, I realise that a stray ginger and white cat is living somewhere behind this bush in my new garden. I name him Darren. 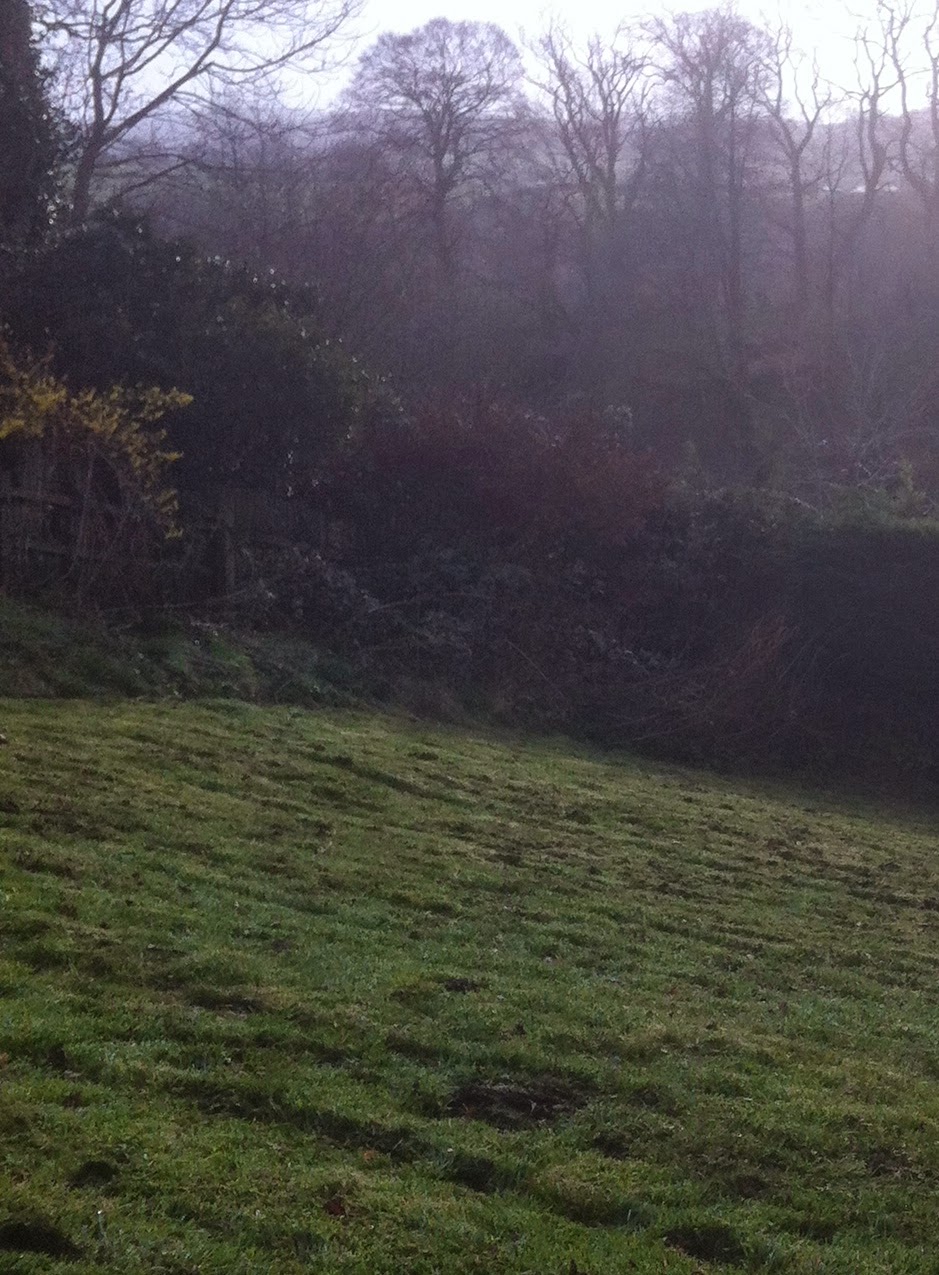 April 2014
Darren begins to spend a lot of time in the area immediately surrounding the house, meowing and staring in through the windows. Realising that he's a different character than I first took him for, and that his meow sounds like he's saying "Geeeeooorge", I name him George. My four cats seem mostly okay with him, except my elderly, lifelong pacifist cat The Bear, who, in a wildly uncharacteristic freak out, goes a bit "kung fu" on George. 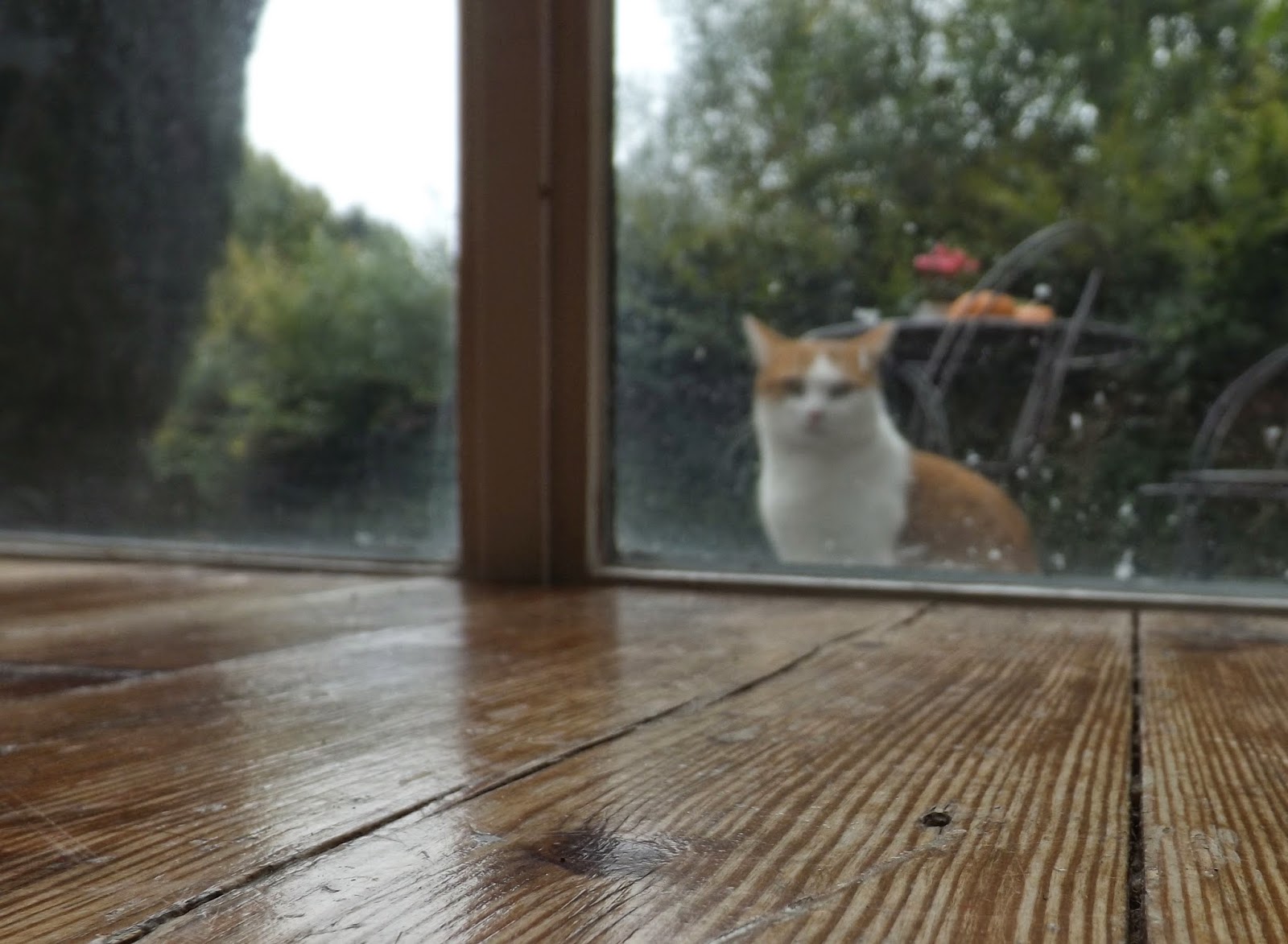 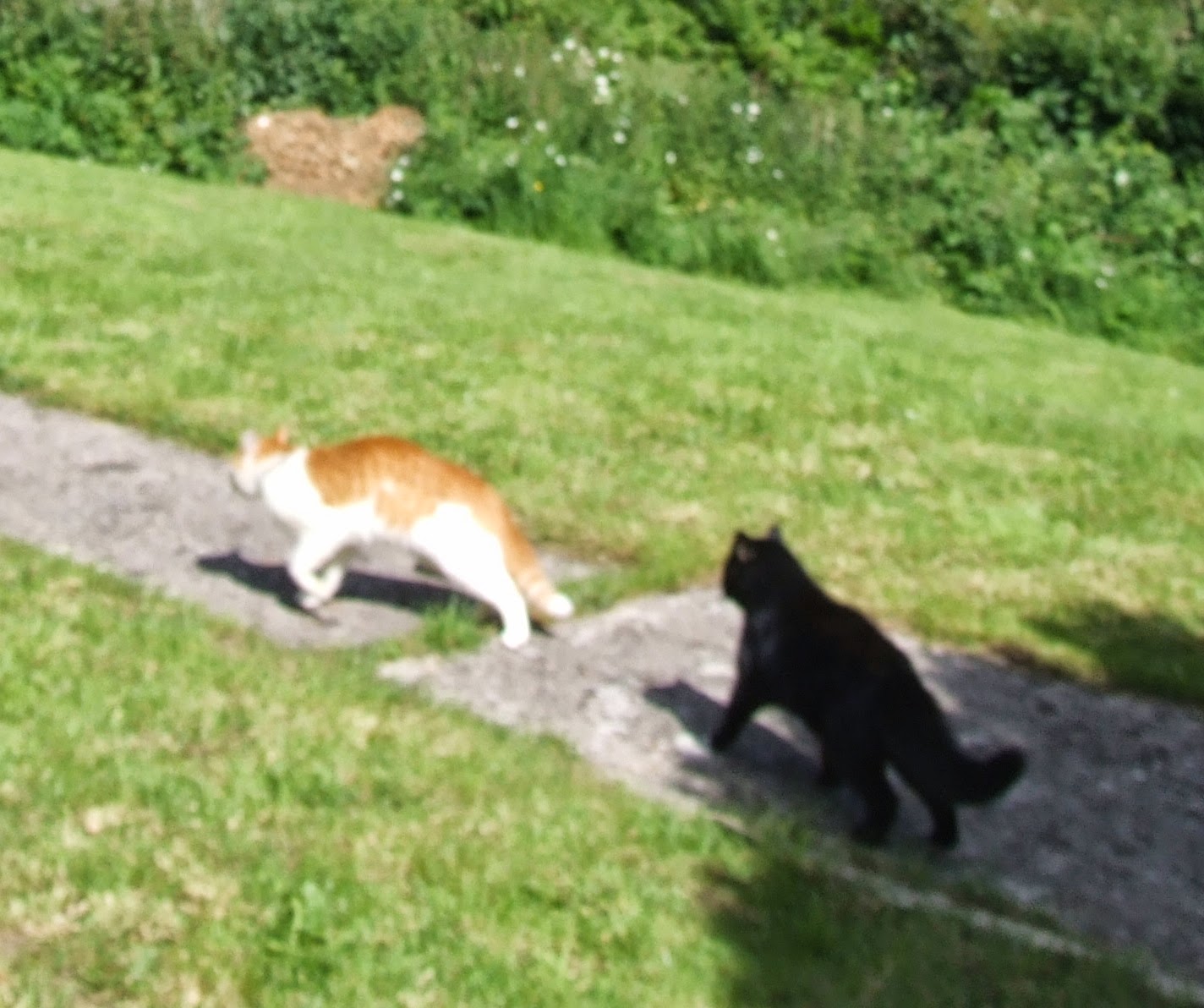 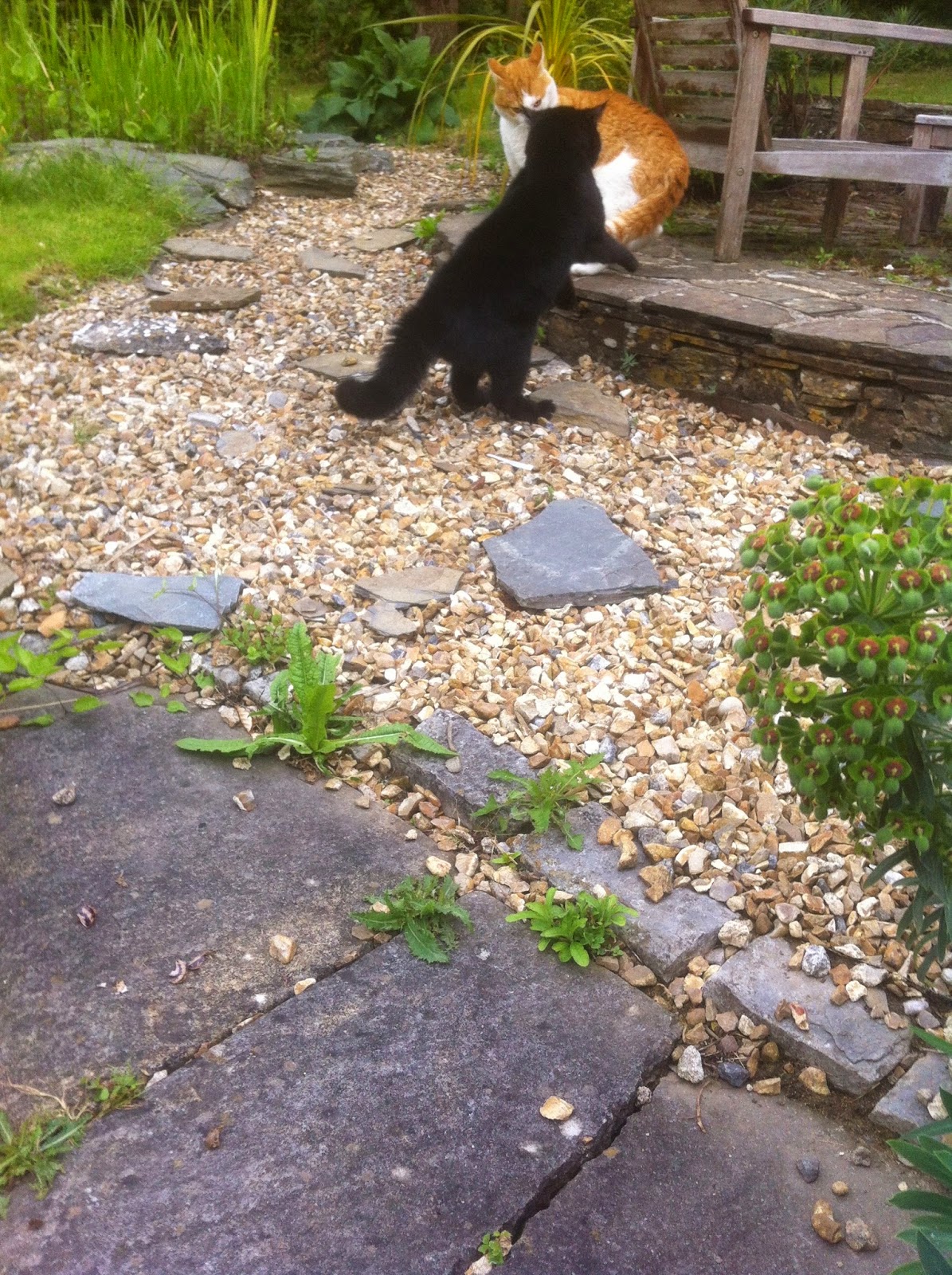 May 2014
After much perseverance, and leaving a lot of snacks out for him, George and I become friends, at a distance.

May 2014
I lure George into the house. His guard immediately drops and he begins to purr. We go to see the vet, who removes George's balls, attends to his cuts, ear mites and scratches and tests him for FIV. Admirably, George seems to hold none of this against me. 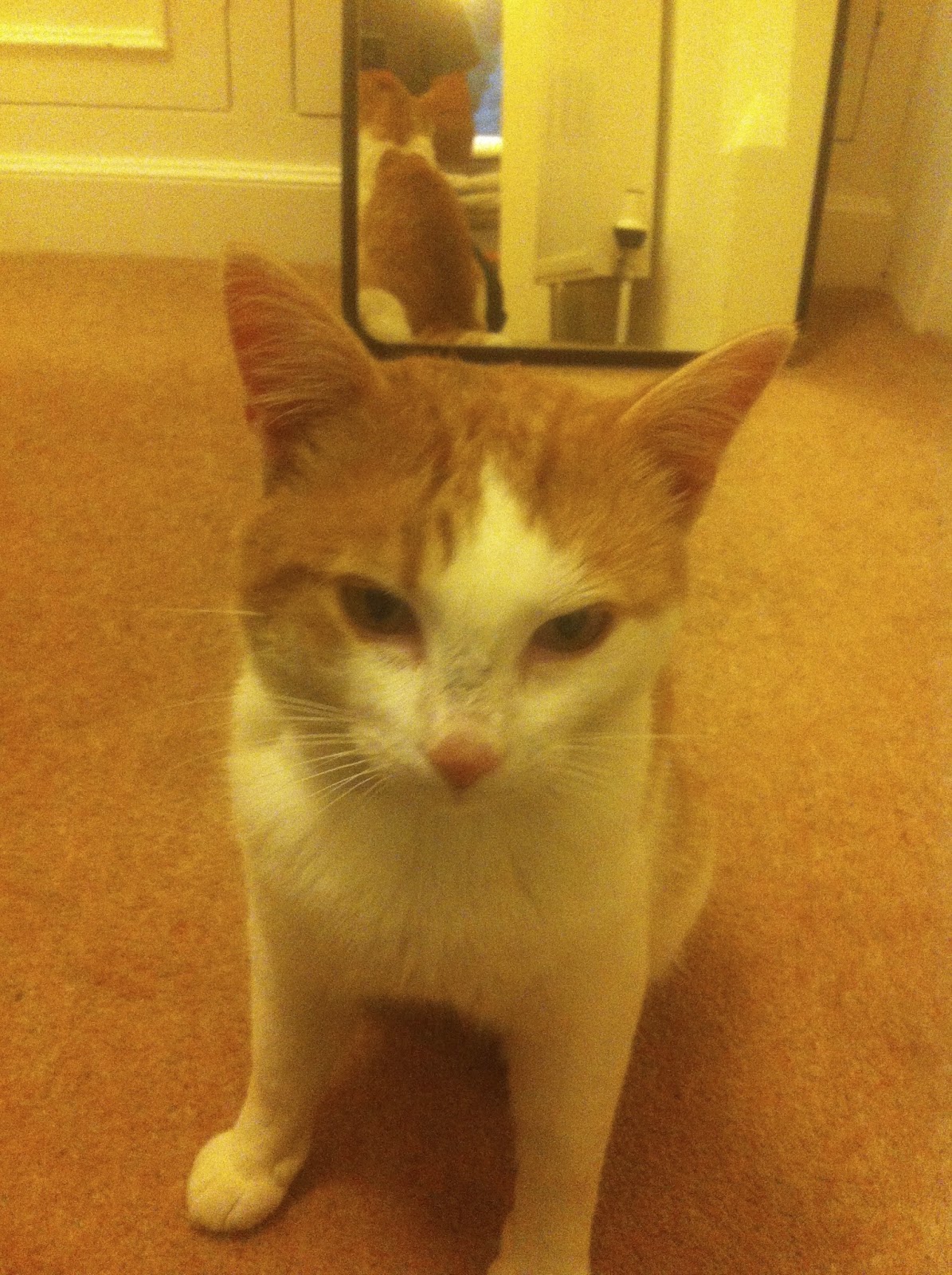 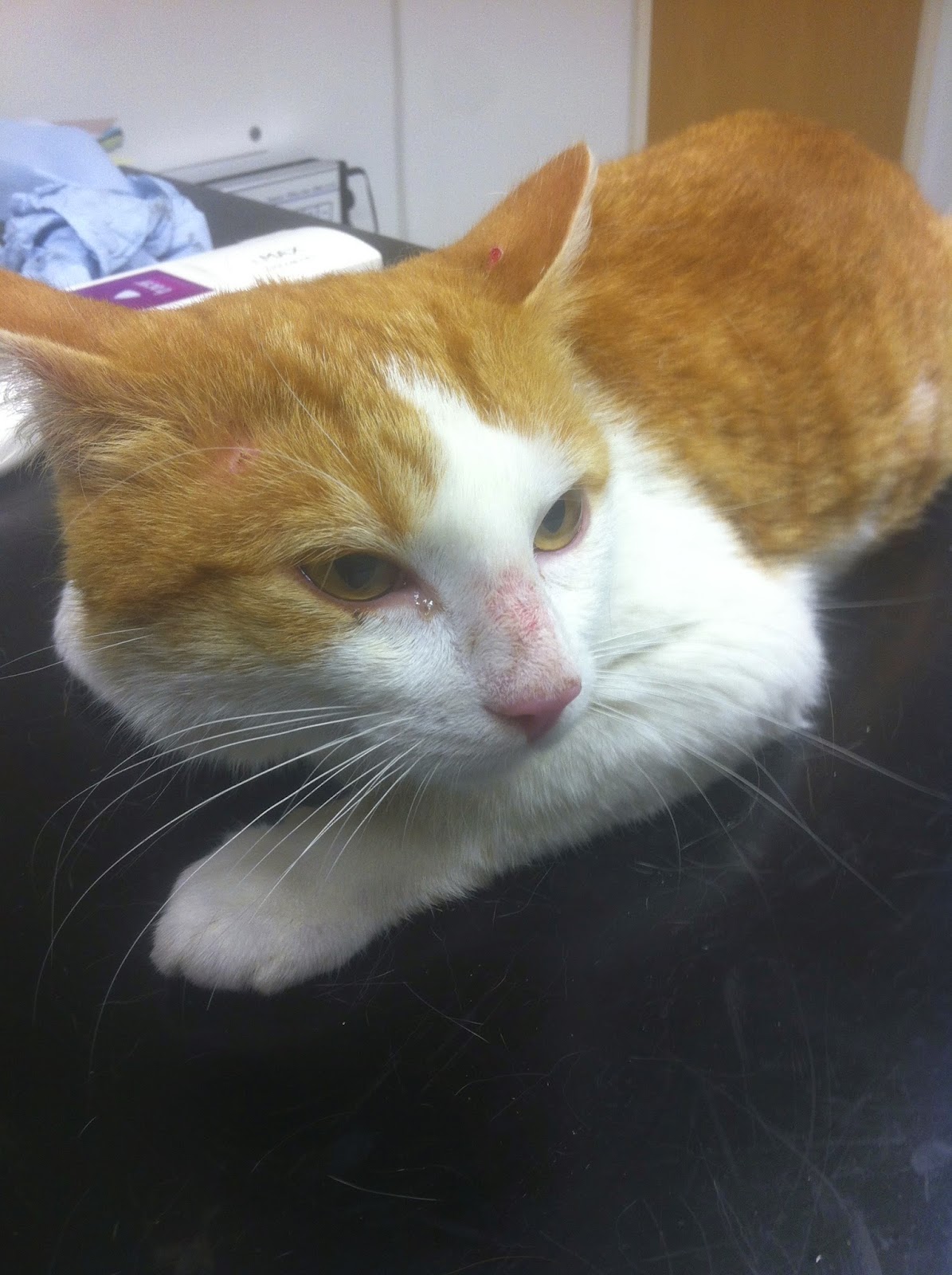 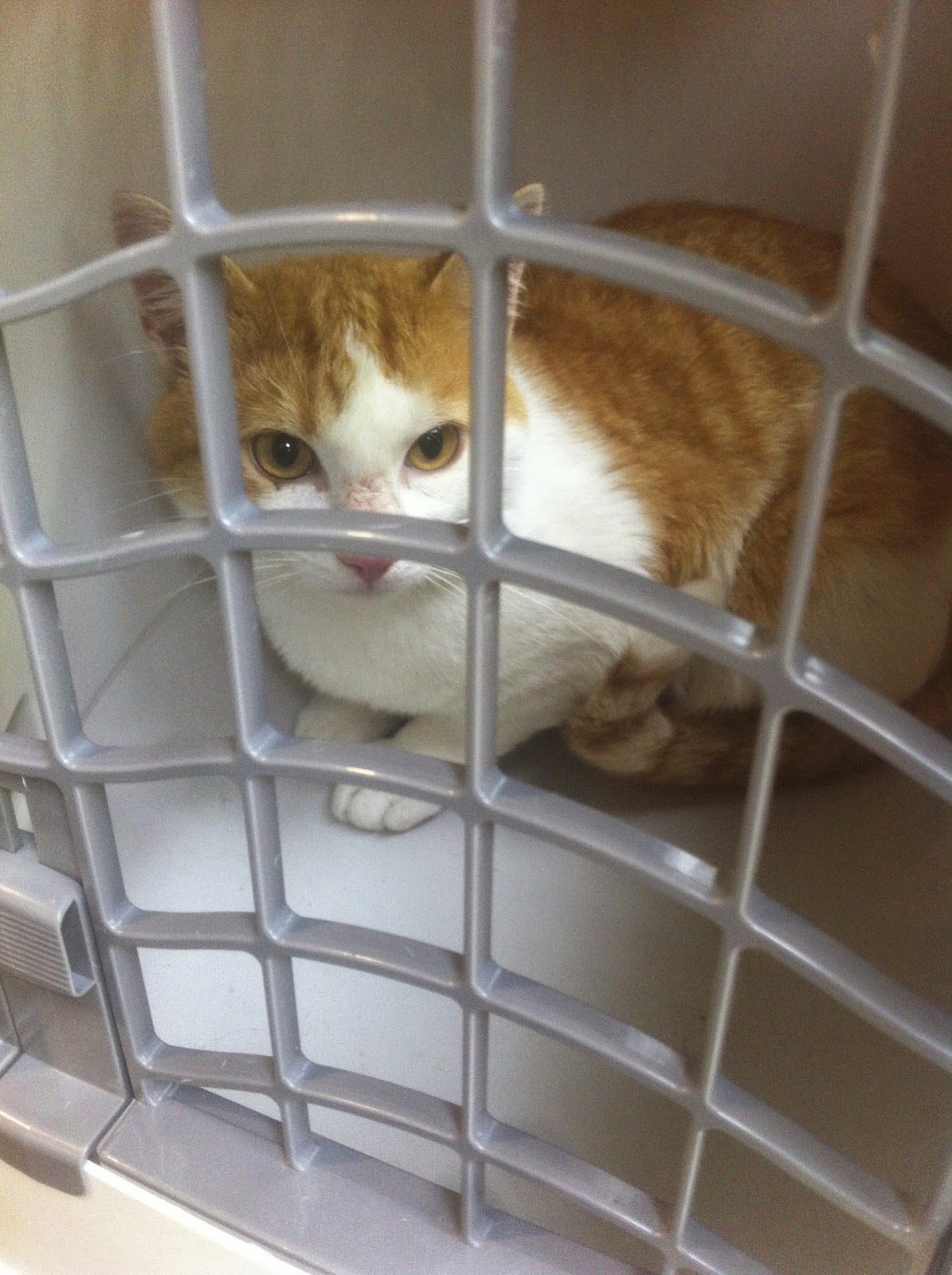 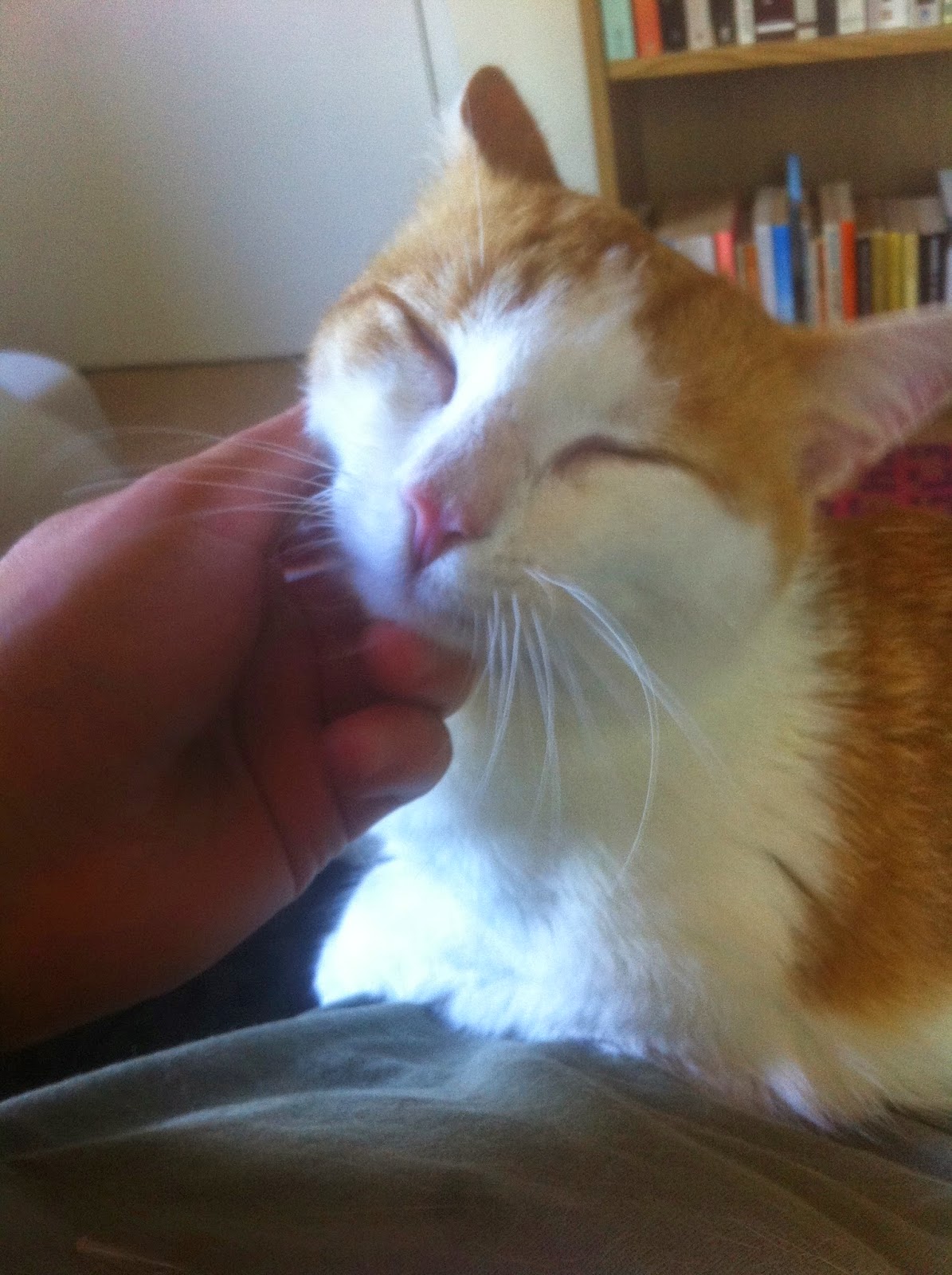 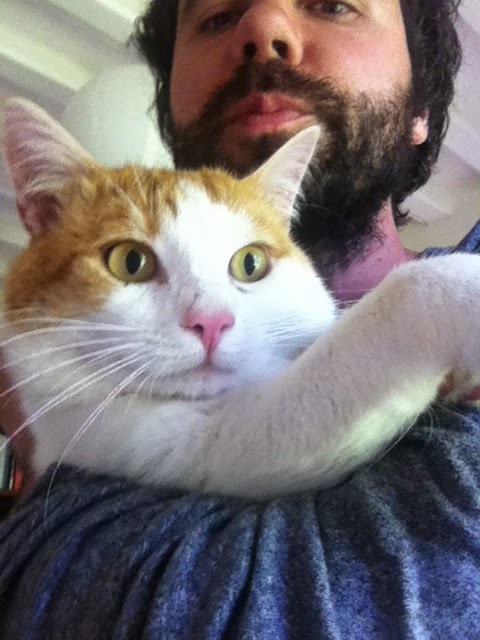 June 2014
George begins to sleep on me every evening and follow me around all day. We also try to recreate 1967 San Francisco together in our spare time. 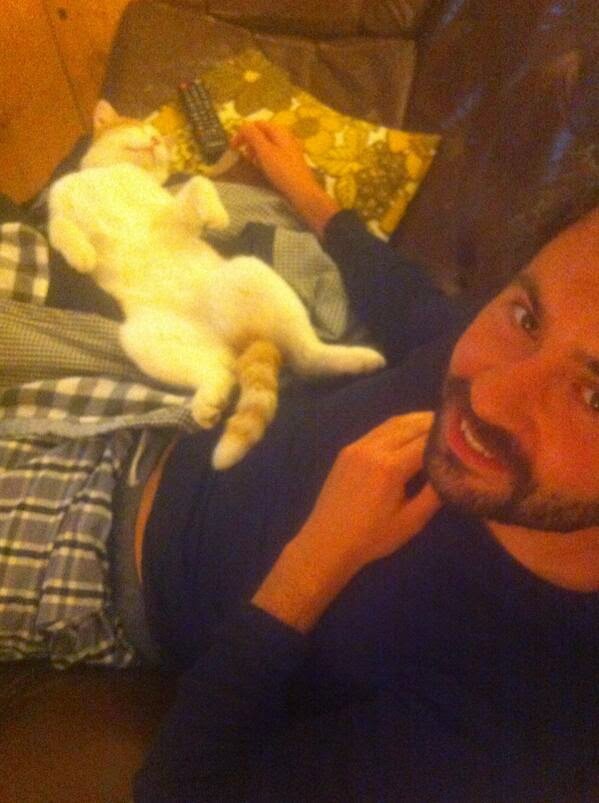 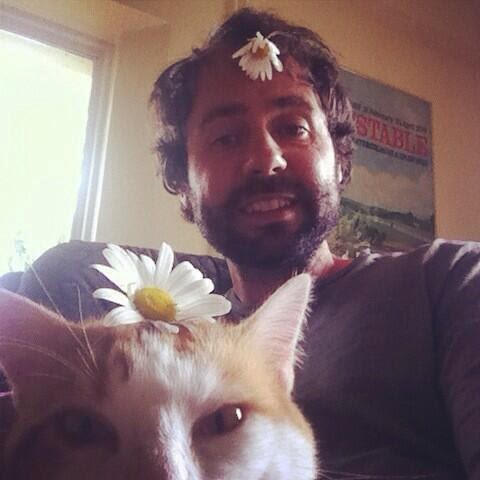 July 2014
George puts on weight and develops a glossier coat. He climbs trees, sleeps on sofas, listens to stoner rock and drinks wine but, despite his neutered status, continually tries to have sex with my female cat, Roscoe. Roscoe begins to spend a lot of time at the pub. 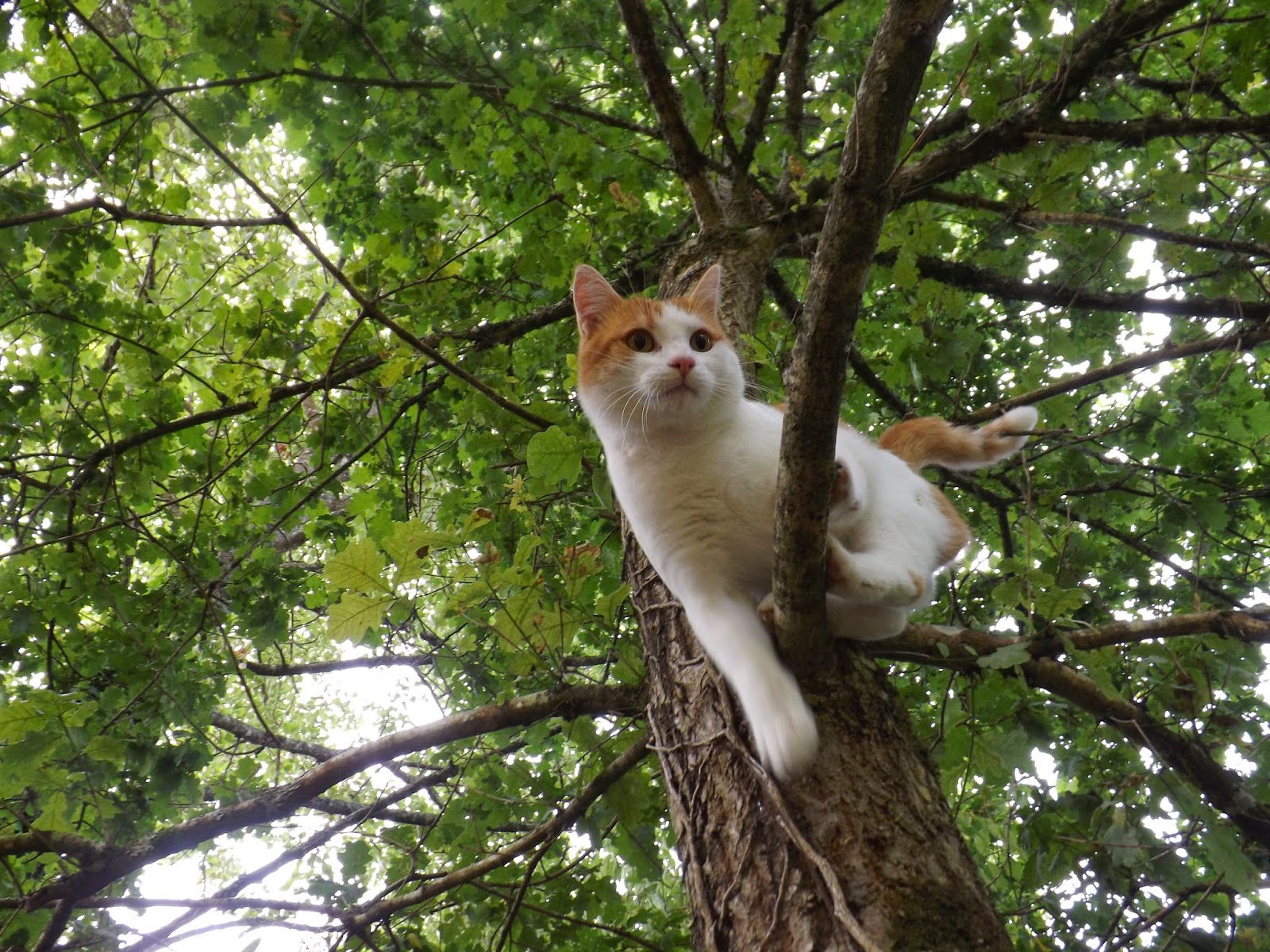 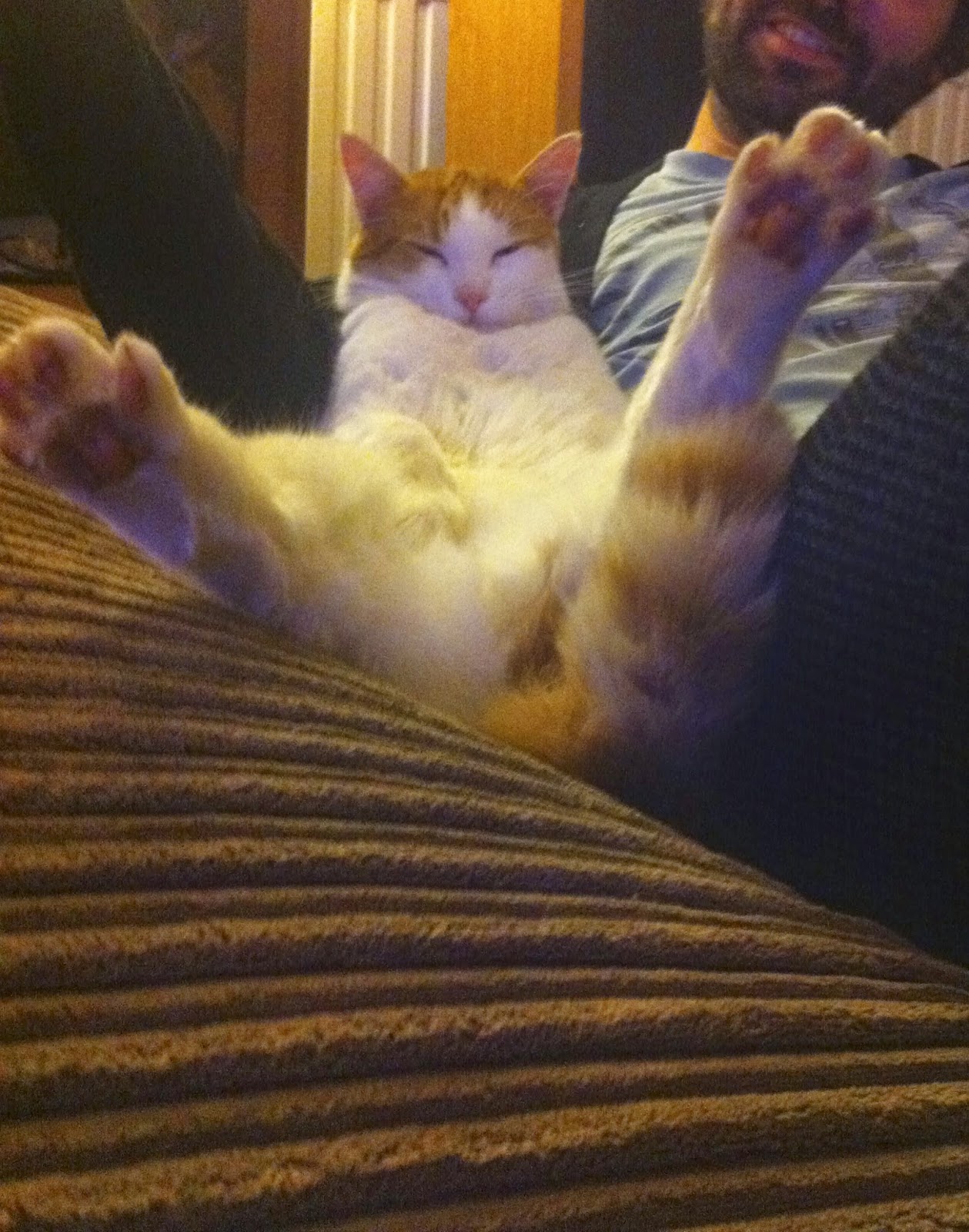 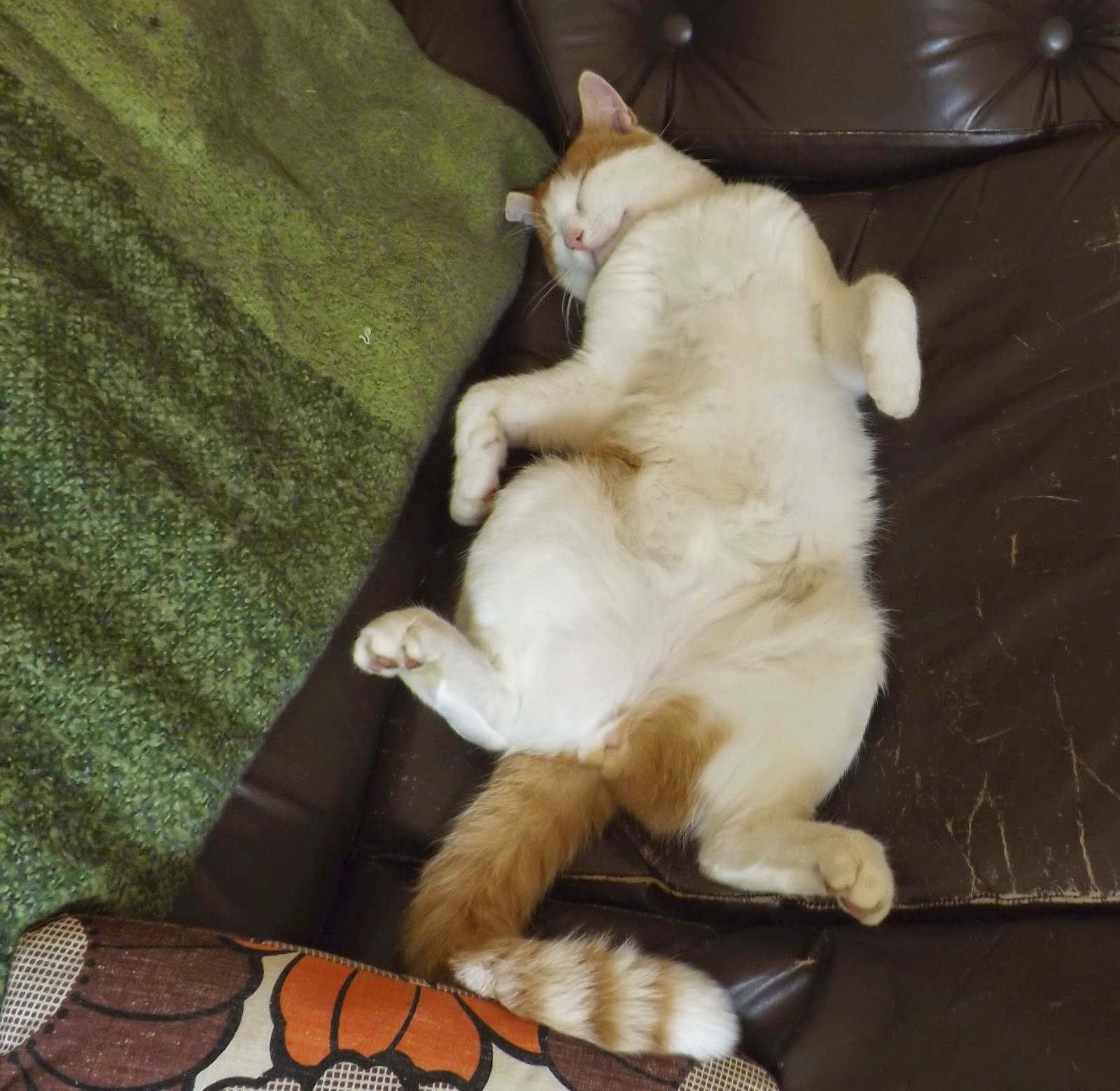 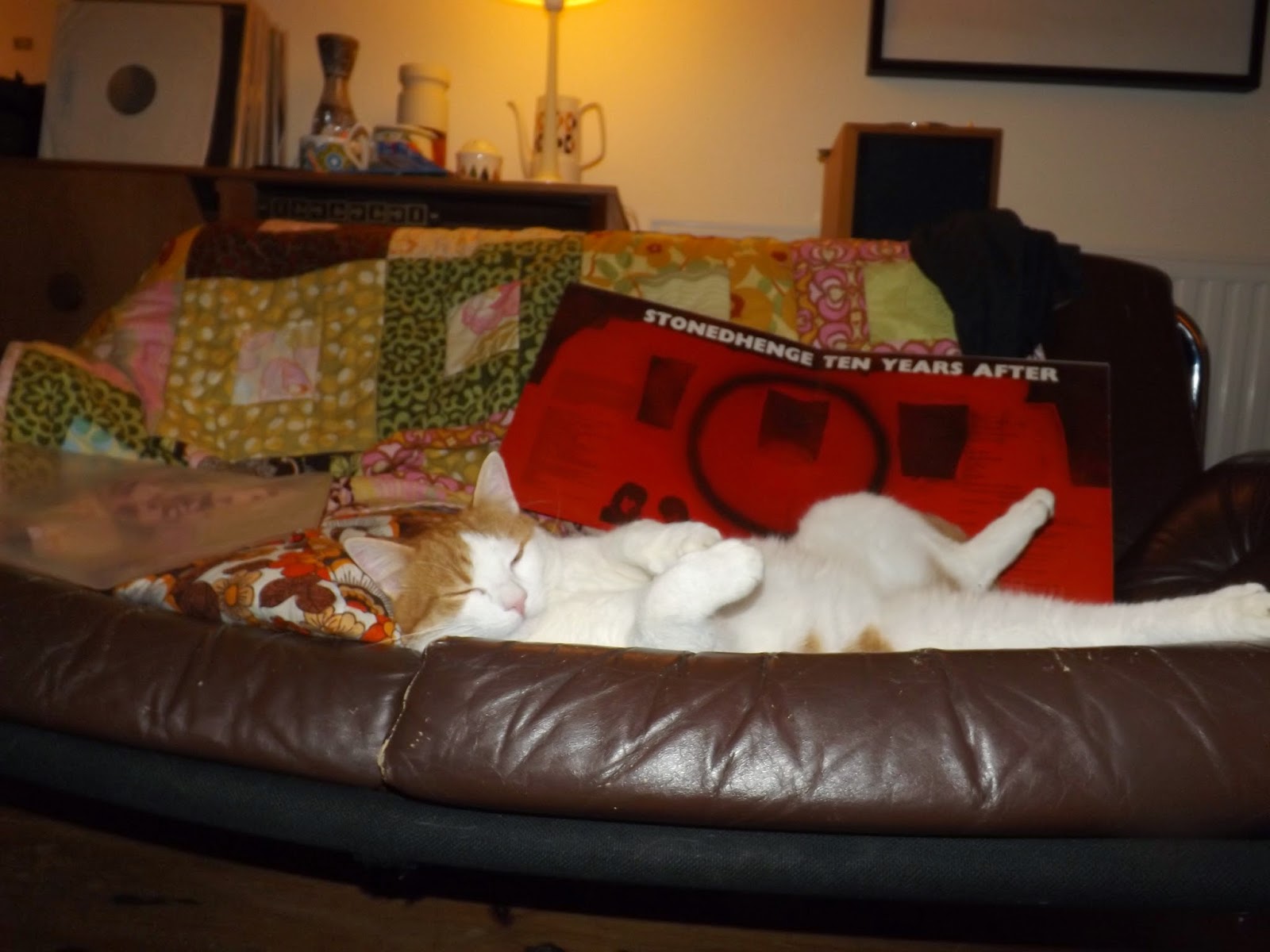 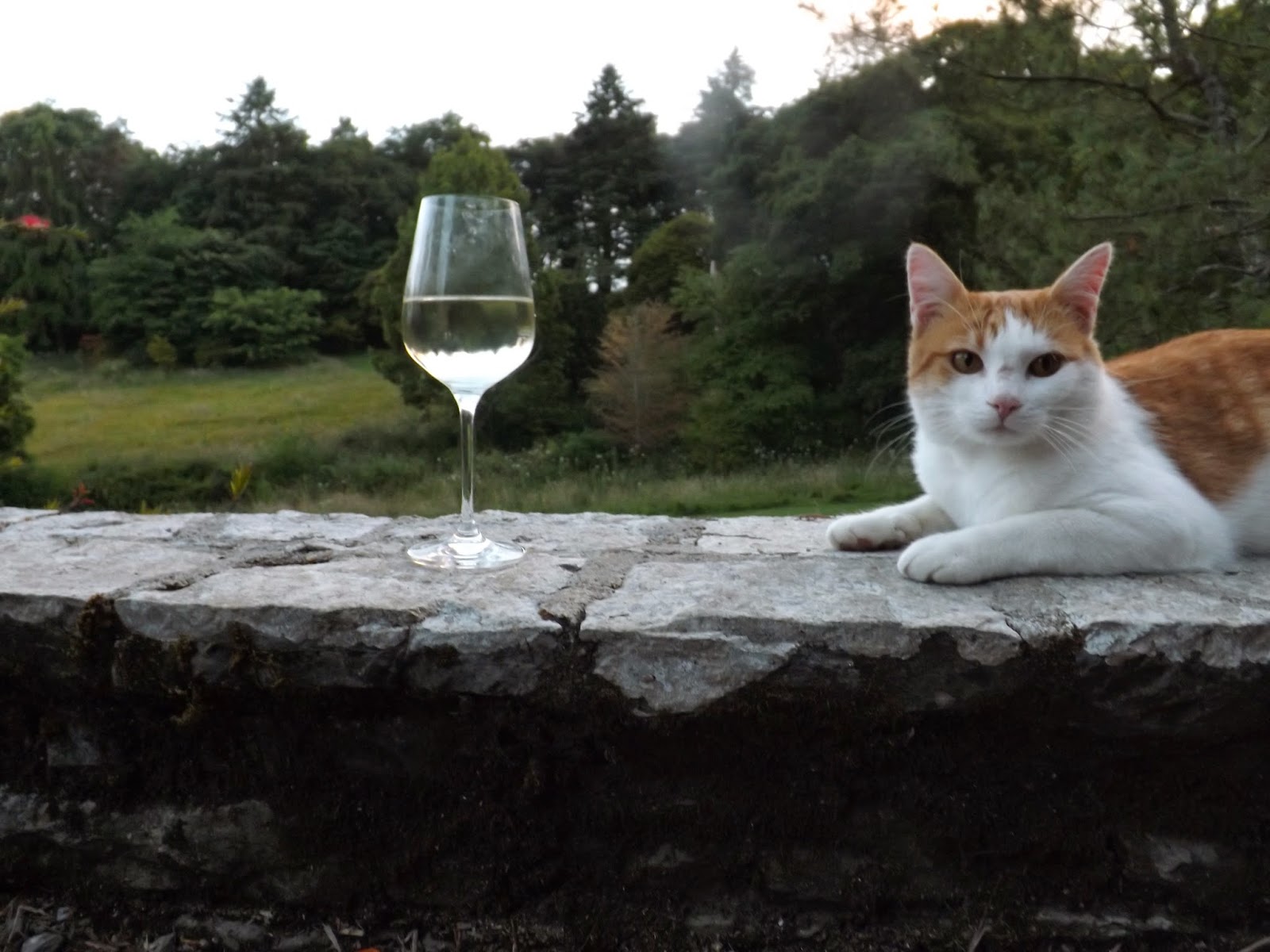 August 2014
George and The Bear put their previous differences aside and become friends. 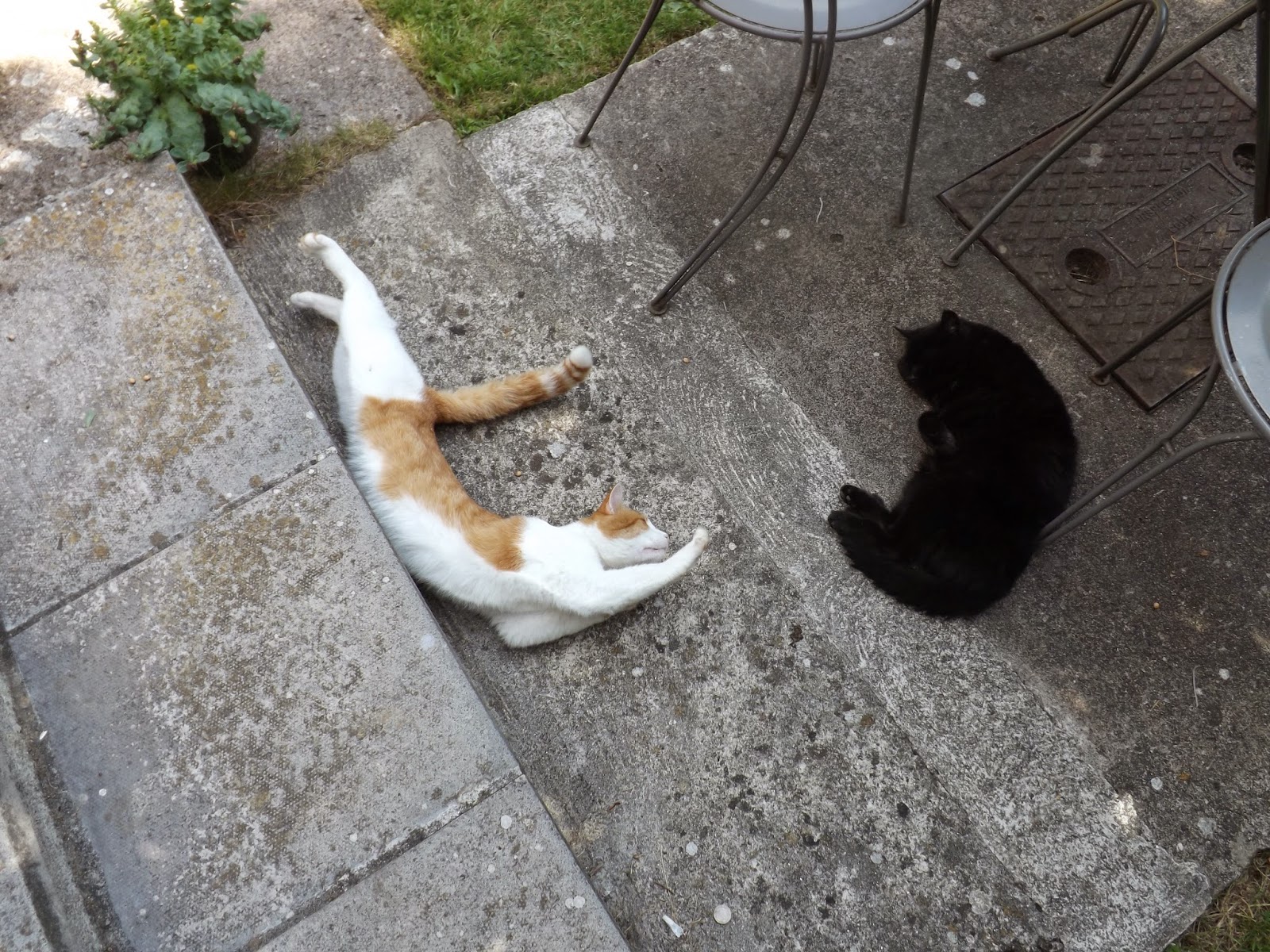 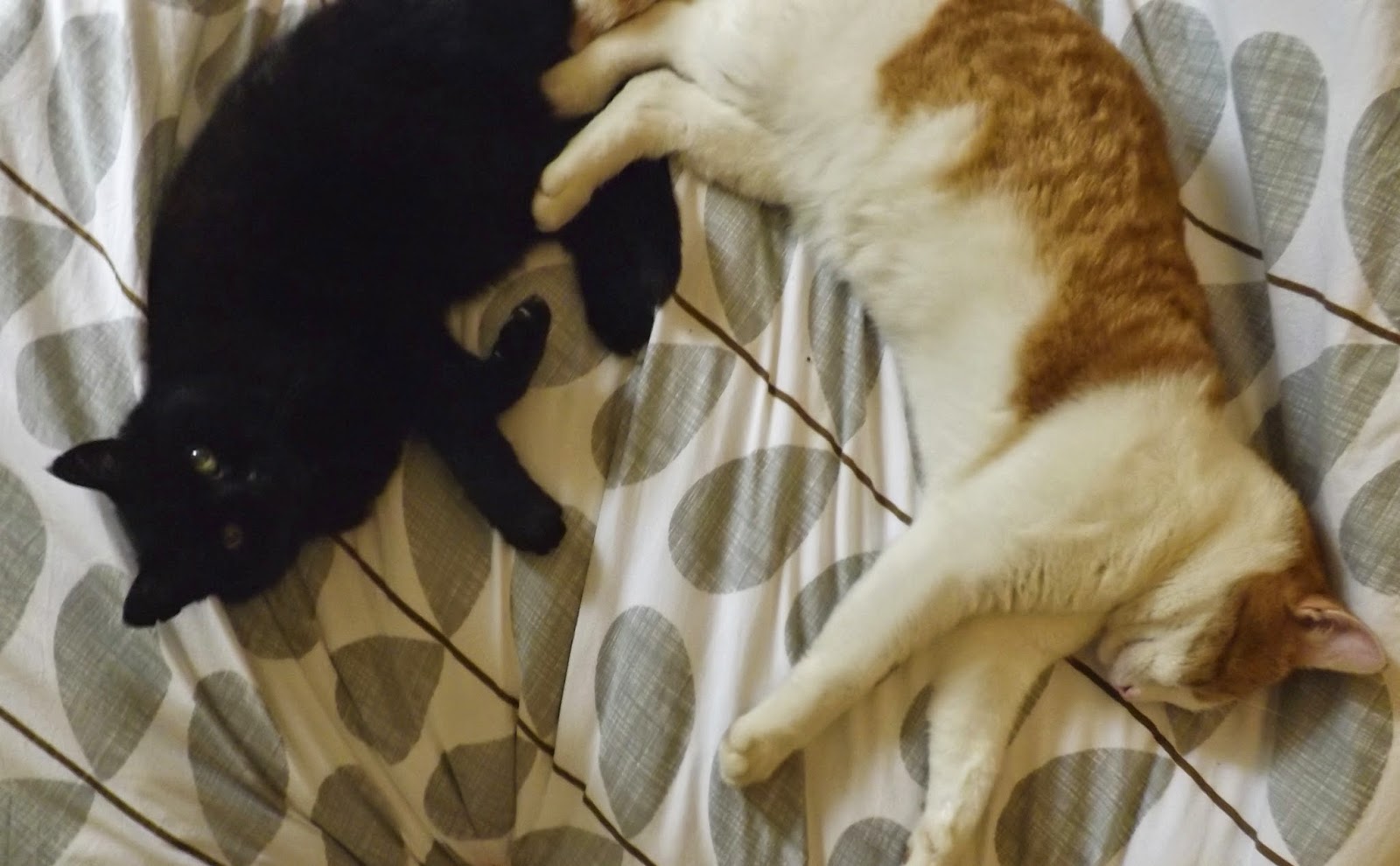 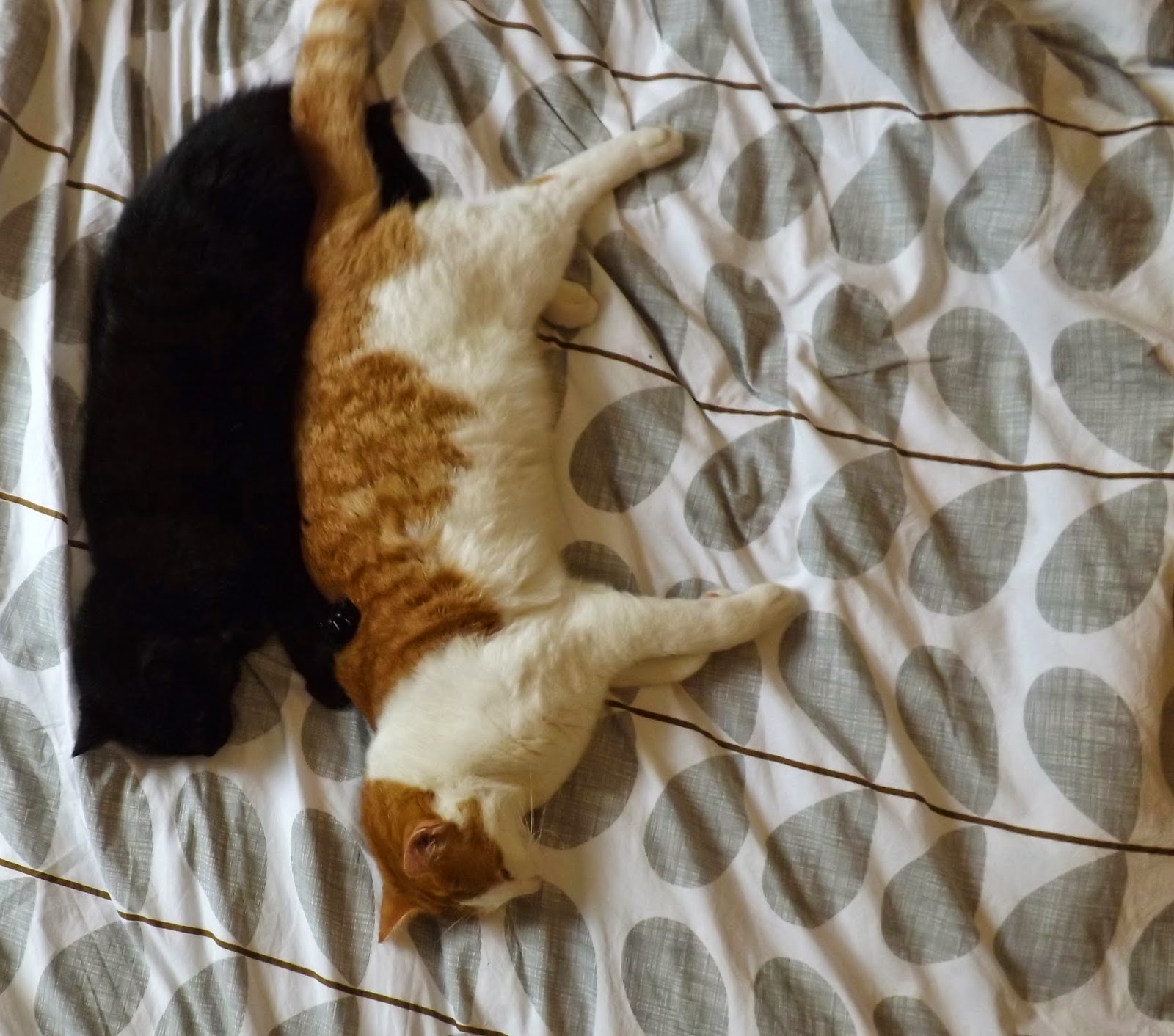 September 2014
George and I start to go on country walks together. October 2014
After my mum and dad's cat Floyd is killed by a car, George - whose differences with Roscoe have proved to be irreconcilable - goes to live with them in Nottinghamshire. He is a bit down and scared at first, and my mum reports that he is "missing me terribly" (I want to believe this but cannot be sure), but he soon settles in. 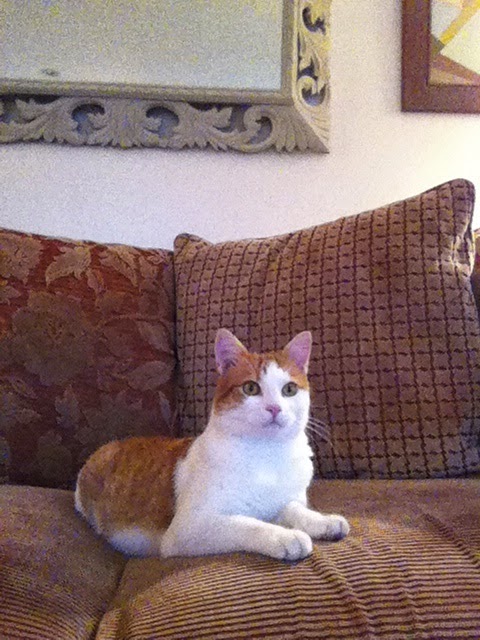 December 2014
I visit George (and my mum and dad) for Christmas. He seems to be very happy, but also, quite possibly, stoned. 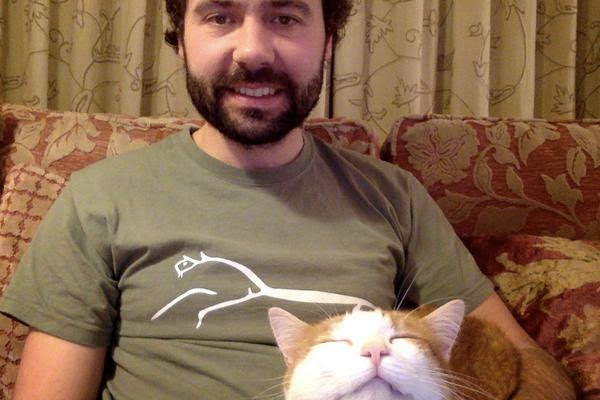 March 2015
George, now truly settled at my mum and dad's house, falls in love with their neighbour's cat, Casper. 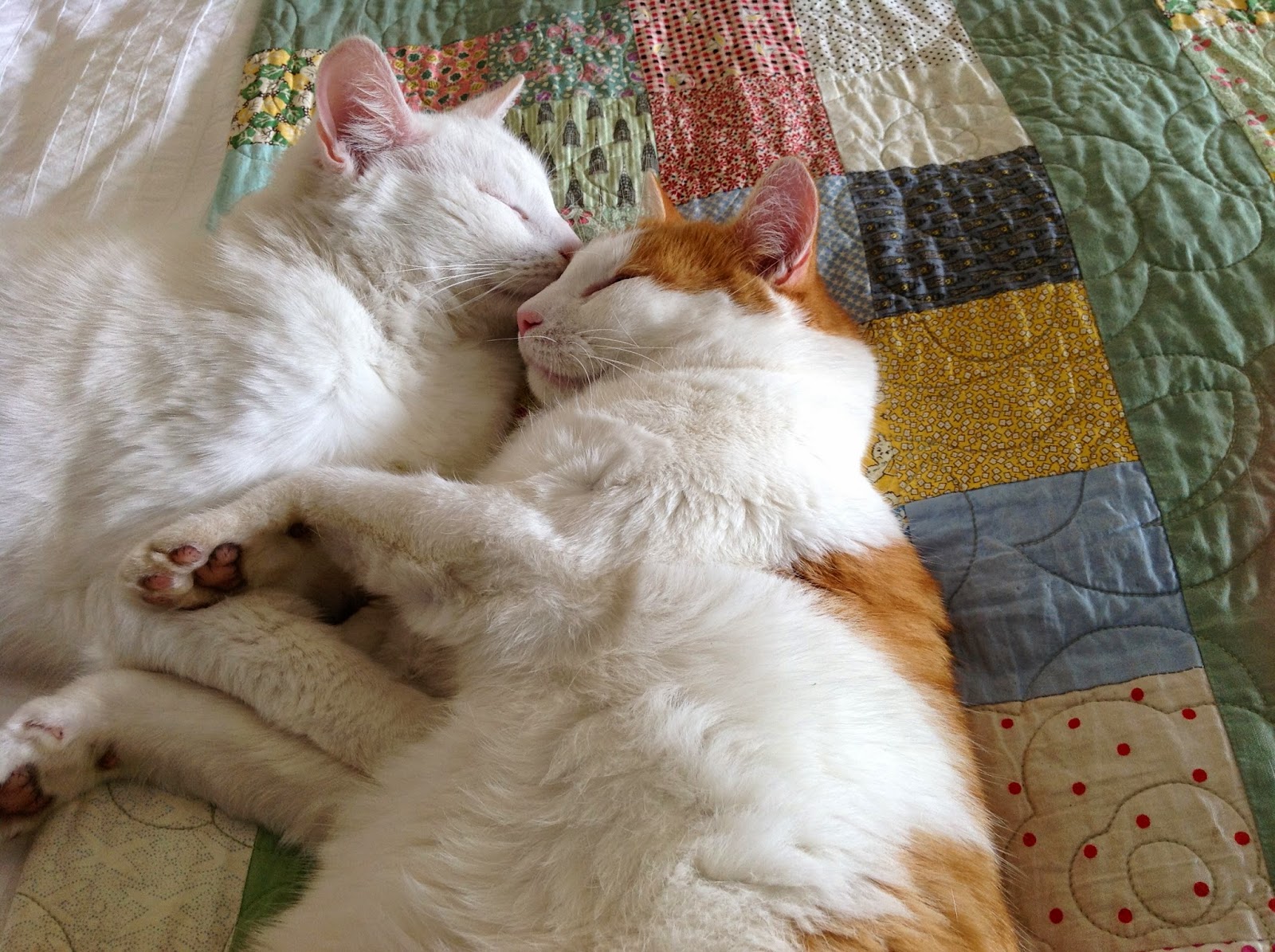 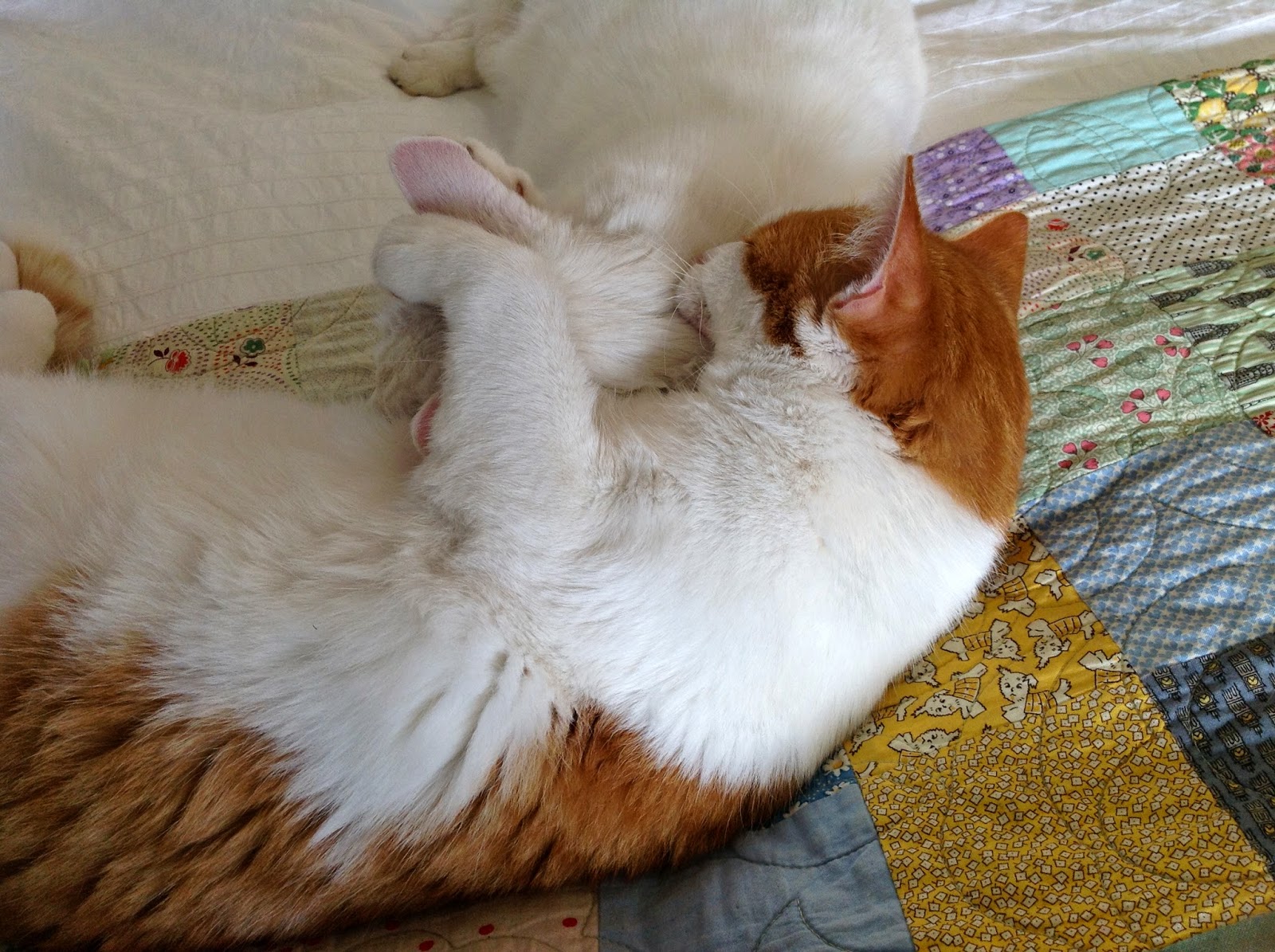 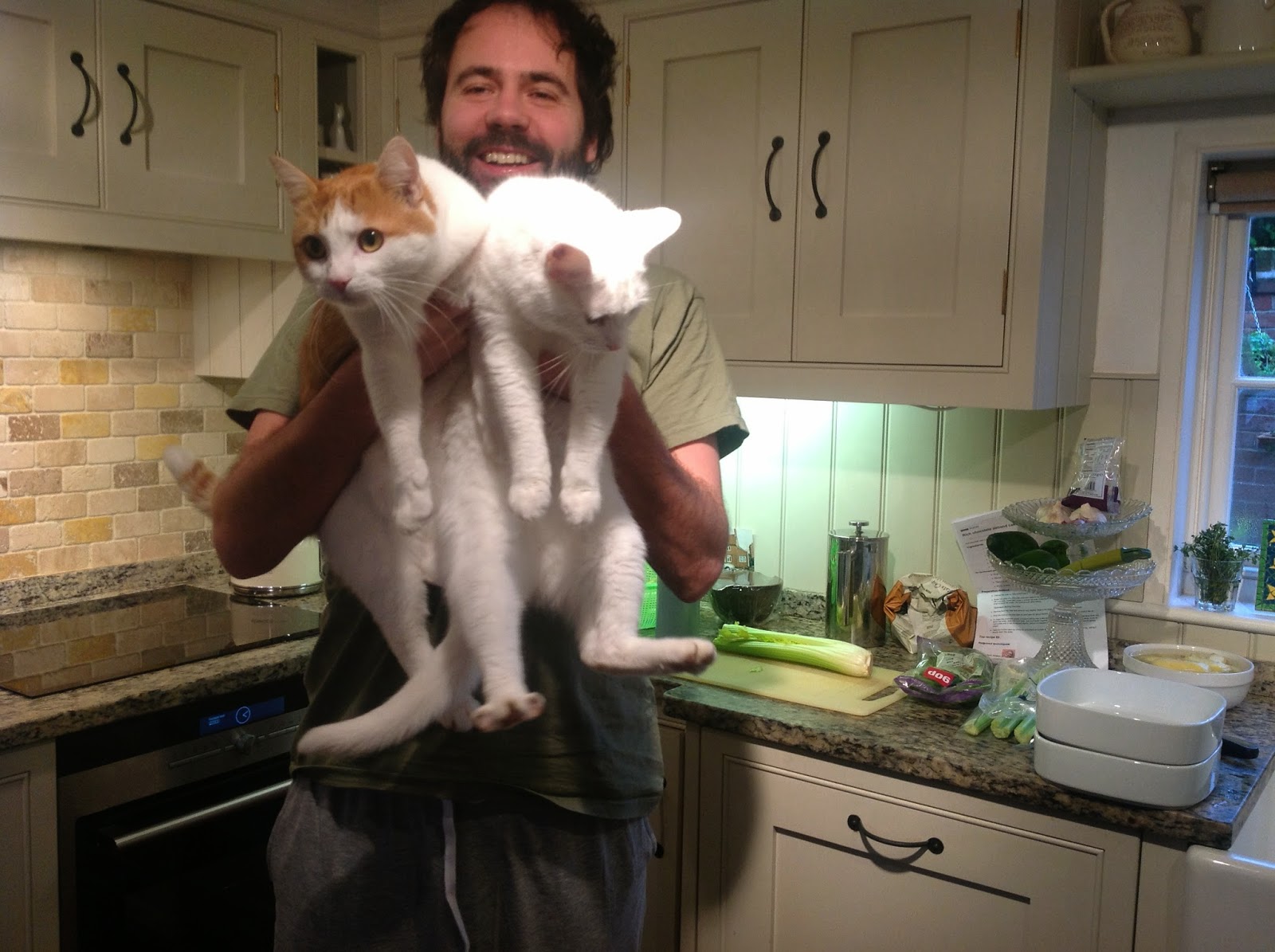 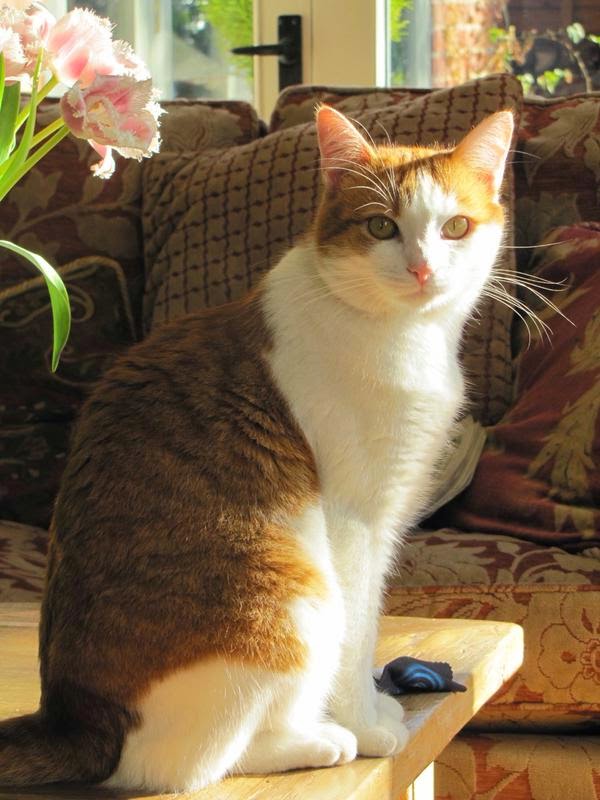 You can read more about George in this Guardian column I wrote and in this follow-up column. I've also written George's full story in my new book, Close Encounters Of The Furred Kind, which is published in October and is the follow-up to my previous book The Good, The Bad & The Furry.

I've been following George's story all along, but it's nice to see it summarized like this. So sorry that he couldn't stay with you, but at least he's still with family. And I love the little video of him playing with Casper.

When the cat is away said...

Wonderful story - I've never heard anything like this. And yes - he looks very stoned! :D

Great post, Tom. Glad that George found a happy home with your folks. We are excited to read your new book.

Thanks for this saga in photos and your characteristically tongue-in-cheek delivery! I enjoy My Cat is Sad because every day!

So glad you found George a great home when it didn't work out at your place. What a sweet boy he is!

Your cat is sad because you are flirtatous, unfaithful, and will bring anything home that purrs

Have been following George's progress - what a great ending!

I must have missed news about Floyd, I'm so sorry to hear he was hit by a car. George looks like a lovely chap (Roscoe humping aside) I'm glad he found you and consequently your folks. We couldn't have poor Caspar getting lonely!

Lovely. And as a bonus a cat wrestling video, Kendo Nagasaki vs Mick McManus.

I love this story! Thanks for sharing all the photos. :)

So sad because he was obviously a friendly cat and must have belonged to someone maybe they moved away and just left him behind. He looks so lovely and I'm really glad he is happy now

Beautiful cats! What great documentary of their lives!

Aaww loved this! George is such a stoner sweetie, it's so good to see him happy and safe :)